“Game Changers” is a great name for Joffrey Ballet’s February season (February 15-26, Auditorium Theatre), and it may help audiences to wrap their minds around ballet that pushes the envelope, but that’s nothing new for the Joffrey.

By curating three cutting edge works for ballet by three of the edgiest cutters of the ballet idiom at work today, the Joffrey keeps the faith with a tradition its founding visionaries, Robert Joffrey and Gerald Arpino, established at its inception, back in 1956. When the Joffrey was setting the ballet world on its ear with crossover works like Arpino’s “Clowns,”  Joffrey’s “Astarte,” and Twyla Tharpe's “Deuce Coup,” set to music by The Beach Boys, the dance world was still stuck in an “us and them” schism that kept the worlds of ballet and modern dance on separate planets.

Robert Joffrey and Gerald Arpino’s vision for a transformative use of classical ballet as a viable medium for modern audiences embraced the game changers that preceded them as well, with  bold revivals of Kurt Joss’s “The Green Table”  (1932), and Leonid Massine’s “Parade” (1917), a collaboration with Eric Satie, Pablo Picasso, and Jean Cocteau.

This season’s program features Christopher Wheeldon’s other-worldly dance poem, “Fool’s Paradise” (2007), Wayne McGregor’s emotional subterfuge, “Infra” (2008), and Justin Peck’s celebratory “Year of the Rabbit” (2012). All three pieces masterfully employ the highly codified system of movement universally recognized as classical ballet while at the same time infusing their movement design with the emotional rhythms, asymmetry, and body isolations we associate with modern dance. All three works demonstrate that there is no substitute for the versatility and technical range that classical ballet training affords its practitioners, whether in traditional or contemporary movement idioms. Make no mistake; this is ballet, but it is ballet that has come of age in changing times.

What qualifies all three as game changers is the degree to which the ballet idiom functionally escapes its roots in the academic forms of the 16th-Century French court and pushes the limits as a viable representation of today’s world.

Ghosts of past game changers whisper in the rush of everyday movement, the simplicity of walking and running, pelvic and upper spine contractions. Spiral  turns and falls to the floor, flexed feet and turned-in legs channel Murray Louis, Martha Graham, and Merce Cunningham. The use of digital media evokes the visual spectacles of Alwin Nikolais. The psychological  gestures of internal conflict, the manipulation of flow, weight, and shape, call to mind the daring departures from convention of German expressionists, Mary Wigman, Hanya Holm, and Harold Kreutzberg. The thrilling use of visual orchestration in concert with the musical score, and the visual design of large group movement recalls that of George Balanchine.

And yet, each of the three pieces in “Game Changers” is performed by women in the point shoes of Marie Taglioni’s sexually unattainable 19th-century sylph, and by men still exercising the cavalier prince role of the ballerina’s lift man and pirouette supporter, but retooled in modern context  as partners in search of/engaged in relationship.  Real men and real women people their stage: dreamers, pedestrians caught in the crossfire of world events, or athletic millennials, all in a particular intersection of time and space where we might find ourselves today.

In the world of Christopher Wheeldon’s paradise, dancers—why they are “fools” I cannot say— emerge out of smoky darkness, where nearly nude men and women walk in a slow ascent toward the audience through a shower of falling petals.  Joby Talbot’s score for piano, violin, and cello, in a hauntingly beautiful live performance, creates an aura of timelessness that transports us to dream-state mentality. Just when the caressingly beautiful movement is about to anesthetize, the dynamic shifts, the casting changes, and we are in the midst of Victoria Jaiani and Temur Suluashvili’s sensual duet of off-center pirouettes and spiral corkscrews around one another, first with Jaiani’s feet firmly planted, then the same movement elevated to ethereal realms en pointe. The simplicity of walking is a recurring theme in changing sequences of duets, trios and quartets. Fouetté arabesques dipping into penché repeatedly interrupt lively percussive episodes with a rorschach-like symmetry, partners mirroring each other, only to disassemble. The many lush back arches of Fabrice Calmels and April Daly’s volatile unison moves lead to an intensification in both music and group movement. Culminating in a meld of earlier movement themes with the abrupt dynamic of jarring gestures and broken flow, the entire ensemble coalesces in a final breathtaking human sculpture of intertwined bodies. 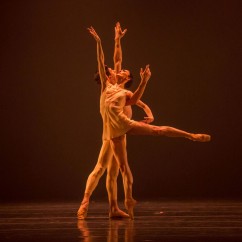 Quirky, disturbed gestures open the first moments of Wayne McGregor’s “Infra.” Set designer Julian Opie’s LED screen set—a digital bridge horizontally bisecting the space between the stage floor and the ceiling in a split-screen view of a mass transit terminal—creates dramatic tension between the monotony of digitally-realized commuters and the emotional intensity hidden, literally, below its surface in living bodies. The perpetual motion sameness of the images hammers the metaphor home with inescapable numbness against the prickly emotional environment of the world erupting into unpredictable chaos beneath it.  Minimalist composer Max Richter’s score begins with distorted electronically-generated sounds of  the subway, gradually infiltrated by live violin, viola, cello, and piano in Philip Glass-inspired repetitions and chromatic progressions. Extreme intensity propels undulating bodies, wildly gesticulating hands, and torso eruptions, contrasting a certain monotony, and yet, somehow, poignant humanity of the music. Isolations of a single hand, a head tilt, a shoulder twitch seemingly render the dancers puppeteers of their own bodies. The emotional intensity of the live dancing grows in ever-more stark contrast to the passivity flowing across the digitally-lit bridge above. Here, Wheeldon manipulates the forms and recognizable vocabulary of classical ballet as it devolves into increasingly distorted torso movement. The emphatic solo entrances of Yoshihisa Arai build to increasingly wrenching movement, accompanied by the sound of explosives. Arai’s brilliant solo performance embodies the interior heart of the piece, and physicalizes an urban pulse and the struggle to survive. In the world of “Infra,” relationships are fleeting and desperate. Here again, just when we are ready to scream, “Stop!” the digital LED march of projected automatons ceases, replaced by an on-stage ensemble of commuters, dressed in street clothes in their own timeless march across the space. Interspersed among them are a few, still human remnants/survivors in the sleek black and white body suits of costume designer Moritz Junge, among them one woman in a silent scream. Into their midst, a couple emerges from the darkness, a parting ray of hope for humanity. 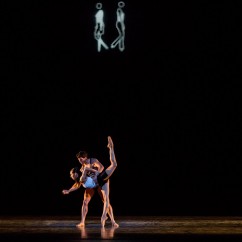 Of the three pieces, Justin Peck’s “Year of The Rabbit” pays the most faithful homage to classical ballet traditions, in both movement vocabulary and Peck’s own, highly effective costuming—the men in navy and light blue geometric T-shirts, the women in fetching slate-gray tutu-esque skirts and leotard tops. But the freshness  and originality of Peck’s group spatial design and his visual orchestration of Sufjan Stevens’ score captivates in a way that pushes ballet traditions into a new realm. The mass flow of full-ensemble movement swirls and spins in breathy, organic rushes across the space, solo dancers expunged from their midst in surprise moments of delight. Playful energy and a celebratory enthusiasm for group movement makes “Year of the Rabbit” a joy to behold. Watch for exciting game changes to come from this promising new contemporary ballet voice. 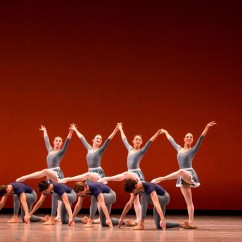 Year of the Rabbit

(All photos by Cheryl Mann)