The familiar sounds of an orchestra tuning up usher us into an unfamiliar setting for the Joffrey Ballet’s “Global Visionaries” (April 26-May 7, Auditorium Theatre). The Chicago Philharmonic, instead of nestling in the cozy confines of the orchestra pit, has taken up residence on stage in full view.  A treat indeed, this superb orchestra, under the baton of Joffrey musical director Scott Speck, is one of the special delights Chicago audiences can enjoy with the Joffrey Ballet.

A dancer warming up onstage meanders off as we discover the bare-bones set for Yuri Possokhov’s “The Miraculous Mandarin” (2016), choreographed for the Joffrey and premiered a year ago at Ohio’s Severance Hall with the Cleveland Orchestra. Three ropes hang from the flies to our right, a metal trellis stands in front of the conductor’s podium, and three steel industrial lamps rest on the floor to our left. Scaffolding forms a bridge across the stage above and behind the orchestra. Three utilitarian wooden chairs, serving dual-duty later on as weapons and cage, blend into the cello section.

The house lights dim, and smoke fills an exposed stage stripped down to brick walls and rigging, signaling that a story is about to take place. Set to the agitated dissonance of Bèla Bartók’s music, composed as a pantomime-ballet in 1918-19, “The Miraculous Mandarin” depicts the sordid tale of three Thugs—Raúl Casasola, Paolo Rodrigues, and Joan Sebastián Zamora in an acrobatic character reveal—and The Woman, Victoria Jaiani, in off-type casting, oozing malevolence as their sexy accomplice. Always the consummate actress, Jaiani captivates in a portrayal layered with underlying vulnerability and compassion. Her three lewd duets with the male suitors who fall prey to her game of deception become a clever means to show the gradual erosion of her façade and her ultimate capitulation to Yoshihisa Arai’s Mandarin. Arai dazzles with brilliant turns, leaps, and split-second spills to the floor, a domineering match for Jaiani’s seductress. 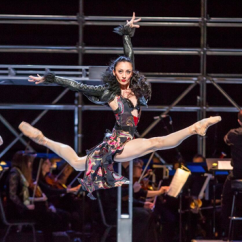 Victoria Jaiani in "The Miraculous mandarin

Appealing as it is in concept to have the music up close and personal to the dancing on stage, the orchestra’s visual presence seemed incidental and diffused the intensity of the storytelling.

The minimalist set is somewhat adrift against the backdrop of the orchestra and the vastness of the Auditorium stage. The  choreography, while well-crafted to delineate character and plot line, would benefit from more clearly defined spatial parameters and less visual clutter.

Ambiguity may have been a deliberate choice but added confusion to the relationship between The Mandarin and The Woman that culminated in their breaking the proverbial fourth wall to sit on the edge of the stage, dangling their legs over the orchestra pit. Their kiss made for a puzzling finish to their tempestuous relationship, he in her lap—alive? dead?—hard to tell, but clearly unhappily ever after. 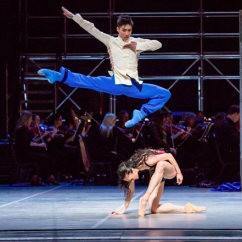 The world premiere of Alexander Ekman’s “Joy,” is a tongue-in-cheek documentation of life in dance, stripping the Joffrey dancers down to their essential selves (and flesh-toned undies) as living breathing people who happen to dance.  Comic relief, satire, and just plain silliness abound with the dancers speaking, howling, and otherwise expressing their individuality. Pursuing the question, “What is joy?” Ekman sets thirty-two dancers loose, each finding his or her own answer in movement. A jazzy, organized free-for-all ensues with handstands, leaps, back flips, pirouettes and summersaults, feel-good social dance moves and snippets of favorite ballet variations. A voice-over wise-guy talks to the audience, posing pseudo-existential questions that collide with on-stage antics and dead-pan double-takes. Ekman teases the audience in extended episodes of toe-shoe dropping, high-heel walking, and star-gazing group wonderment that might be a glimpse into what a dancer’s high looks like at a party after a few too many. 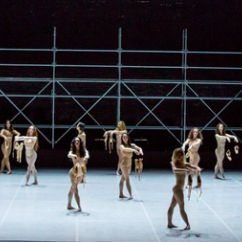 Annabelle Lopez Ochoa’s “Mammatus” (2015) begins with thunder and an LED light sculpture that looks like lightning.  The dancers, in Dieuweke Van Reij’s black, long-sleeved and gloved turtleneck leotards, bare thighs, and black knee socks, move in prickly swarms, spider hands with fingers splayed like tentacles sensing their environment, reacting to each other. Sharp kicks, plucking elbows, and jutting head-bobbing match Michael Gordon’s relentless musical pulse, propelling a perpetual motion drive toward some compelling need. What comes to mind is the elaborate mating ritual of the praying mantis, played in fast-forward mode, in a fabulous display of technical virtuosity. In dreamy contrast to the ground level thunderstorm, the sound of wind accompanies Dylan Gutierrez and Victoria Jaiani in a closing duet as they float, seemingly in the clouds thanks to a magical infusion of fog on stage, in all-white versions of their all-black-clad counterparts. Their joy with each other in this ethereal partnership is a  perfect answer to Ekman’s question. 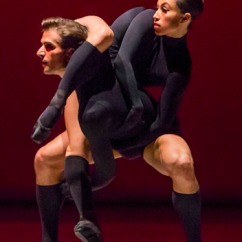 Maybe the theme of the night was illusion, what creates it, and what happens when you take it away. “Mandarin” dabbles in both worlds, telling a made-up story with dancers in costume portraying characters, but against the everyday setting of backstage reality. “Joy,” dispensing with any need for illusion, is all about real people who dance for the sheer joy of it, and “Mammatus” takes illusion to its abstract limits, transforming the human body into insect-like creatures of extraordinary facility, beings who transcend gravity to dance on the clouds.