Everything about Kelly Anderson’s work for her eponymous dance company is fun. Hers is a different kind of dance theater than the brand we’re used to seeing in Chicago, if only because, refreshingly, she refuses to take herself too seriously.

In her latest, Anderson and her cast of seven propose what the end of the world will look like, in an evening-length work called “THE END IS HERE and that’s ok.” As with her previous project, “Livin’ the Dream,” Anderson plays a cameo role while the rest of the cast does most of the heavy lifting. In the opening, we see Anderson holding a poster board reading “THE END IS NEAR.” She then lets it drop below chest-height to reveal the slogan “What Would Dolly Do” on her t-shirt. 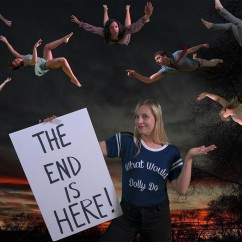 Indeed, much of “THE END IS HERE” is a plot which inquires “WWDD” after the others have found themselves in a purgatory of sorts. In their imagined apocalypse, Cheryl Nowlin, Danielle Gilmore, Earlyn Whitehead, Michael O’Neill, Rachel Molinaro, Stacy DeMorrow and Zach Bird find themselves locked in Links Hall (convenient, since that’s where the show is), after acting out the mundanity of their everyday lives. An ordinarily tidy Links is now scattered with random clothing, accessories and other recyclables like cereal boxes, Anderson and company having distributed bags of this stuff for us to toss into the space on cue.

It’s thankfully one of the only moments of audience participation, although we’re never fully left out of Anderson’s blend of song, dance and theater. As the group muddles through the confusion and fear of wondering what’s happened, Anderson appears as Jolene, a made-up personal assistant to Dolly Parton, to guide them on how to forge a bright new world. Dolly’s there too, well, sort of, with voice over recordings of her quips and phrases made to fit the scene.

As they try to glean from Dolly’s wisdom, the dancers brainstorm what shared values they might put forward as they look to create a bright new world, trying to learn from past mistakes, using a huge sparkly post-it note pad to mark down the brainstorm.

Taking turns, each has a bit of dialogue and dance inspired by heroes that, like Dolly, might impart wisdom. DeMorrow does a hilarious lyrical dance to the theme song from “Star Trek: The Next Generation;” Bird acts out a slow-motion replica of tennis star Billie Jean King’s epic win in the “battle of the sexes” against Bobby Riggs; and there are references to Queen Elizabeth II, Oprah, and even the Care Bears as sources of inspiration for eight intentionally hokey dances and their accompanying monologues.

It’s a formula that Anderson has used before. And the format tends to make her pieces super fun, super long, and after a certain point, predictable. Like “Livin’ the Dream,” “THE END IS HERE” is whip smart in some moments, and laugh out loud hilarious in others, at least to me, but the whole thing hinges on knowing 1980s and ‘90s cultural references. Having grown up at a similar time and place as Anderson, her heroes are my heroes too, so I can’t help wondering if, to another generation of patrons, the whole thing feels like an inside joke. No matter; I’m OK with you laughing at us, even if you’re not laughing with us.