BODYART Dance Company, based in New Orleans, LA, draws from various mesmerizing settings to spark new works. From an abandoned 1920s movie theater to a graffiti mural on Santa Monica Blvd., BODYART’s willingness to embrace location opens the parameters of what movement can be in a public space. It encourages looking beyond the traditional stage for performance and presents spaces that otherwise could go unnoticed. Leslie Scott, founder and artistic director of BODYART, presents five past selections—three commissioned for screen and two onstage—as part of nine “Legacy” programs at the JOMBA! Contemporary Dance Experience (this year, in a digital format). These pieces flourish when the ensemble becomes an extension of their environment without disappearing entirely.

Created in partnership with Beautify Earth, the piece “Legal Canvas” makes a splash. Scored by a peppy Made in Heights track, Jonathan Bryant, Kayla Johnson and Heather Raburn spiral in and out of each other’s reach. They utilize a stunning graffiti canvas as a base and position a skateboard against it and in between themselves making for an exciting element. Intersecting dance with graffiti stresses how art can happen anywhere. “Afternoon Gold” transports us from the beachy, pulsating vibes of California to the soothing, dreamscape surroundings of New Orleans. Edited by Scott, the film plays with dimensions comparing Rachel Abrahams’ height against a brightly colored mural, a set of railroad tracks and a bundle of flowers. The piece lovingly highlights the company’s home base, and Abrahams easily pulls in focus in this high tempo solo set against enticing local scenery.

“Re/stage” takes a drastic, eerie shift in tone. Captured by cinematographer Jason Bahling, performers Megan Krauszer, Andrea Lanzetti, Steph Mas, Erin Okayama, Allison Ploor and Andi Work wander among the intricacies of an old art house. Watching this group travel through the remains of a desolate theatre takes on new significance as the pandemic rages on. Climbing catwalks backstage and weaving between box seats, the bones of this once thriving, lavish oasis awaken to memorialize imagined past performances. It’s definitely the most impressive performance of the bunch.

The final set of dances leave the most to be desired. A joint commission with Grand Valley State University, “Water Story” explores the community’s relationship to water as effects from Michigan’s Flint Water Crisis remain. “Thread” functions as a co-production from Irondale Arts Center and Summerhall at Edinburgh Fringe. A consistent use of moving projections and lighting ends up overshadowing both dances. Splitting focus on a simultaneously moving background and foreground eventually becomes tiresome. When the lighting and projections become less intense, it’s refreshing and allows for brief moments of intimacy. While the screen performances achieve harmony in meshing natural surroundings with performance, technical elements struggle to find balance onstage leading to highly stimulating yet uncertain storytelling. 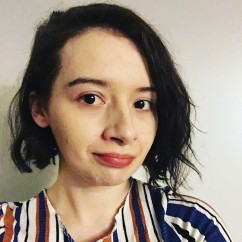 Fellow Mariah Schultz is a critic, dramaturg and audience services leader based in Chicago, IL. Most recently, she was the resident House Manager for Interrobang Theatre Project and on the Audience Services Staff for the Harris Theater for Music and Dance. She’s previously worked with UrbanTheater Company, the League of Chicago Theatres and Collaboraction. She’s curated play submissions for the Rockford New Play Festival (Rockford, IL), The Syndicate (Chicago, IL), Kitchen Dog Theater (Dallas, TX) and the Campfire Theatre Festival (Boise, ID). She graduated from The Theatre School at DePaul University with a B.F.A. in Dramaturgy/Criticism and has worked on various productions as a dramaturg, deviser and stage manager. Mariah currently contributes to the online theatre collective, Rescripted, and the Chicago Theatre Triathlon, her blog that provides advocacy, education and celebration of local companies, artists and works.