Lucky Plush Brings Back Best With “Better Half”

Seeing Lucky Plush at the Steppenwolf 1700 Theatre, an intimate new black box tucked behind the prestigious theater’s next-door bar and café, is like watching an endangered species in its natural habitat. The dance theater ensemble has moved increasingly toward presenting work at larger venues, which necessarily tugs the work in a slightly different direction. Not that evolution is a bad thing – in fact last year’s “Rooming House,” also presented at Steppenwolf 1700, shares much in common with the revival of “The Better Half,” running through Nov. 18 at the Lincoln Park venue. But there’s something about Lucky Plush’s earlier works that is particularly magical, and my, what a treat to see Julia Rhoads dancing again.

“The Better Half” was the first collaboration between Lucky Plush artistic director Rhoads and theater director Leslie Buxbaum Danzig, who for more than a decade created performances for the physical theater group called 500 Clown. Seven years later, the new car smell has worn off “The Better Half,” and three of the work’s original cast members – Rhoads, Meghann Wilkinson and Adrian Danzig – have returned to the roles they created for the revival.  Like “Rooming House,” “The Better Half” is an intricately woven, slightly absurdist interpretation of an old story – in this case, the 1944 film “Gaslight” – remixing it with samples from other sources like “The Bourne Identity” and Ingmar Bergman’s “Scenes from a Marriage,”  while tugging on some of the loose strings to fill the whole thing with currency.

“The Better Half” is not a strict narrative, and in the spirit of gas lighting, the players are somewhere between reality and fantasy, sanity and insanity. At once, the work lives in a pseudo-fantasy that is part rehearsal for an adaptation of “Gaslight,” narrated by Michel Rodriguez Cintra seated at a microphone set at the side of the stage, and part real-life story. The latter follows the arcs of an intimate relationship – the novelty of meeting and getting to know one another, falling in love, establishing trust, having that trust challenged, and the truce long-term partners must ultimately find with one another to make it work.

Rhoads and Adrian Danzig as the lead couple Mr. and Mrs. Manningham repeat an acrobatic phrase over and over, each time with a slightly different approach, in a sort of “Groundhog Day” loop that inevitably ends the same way: with Mr. Manningham leaving. Mysteries abound in “The Better Half;” it’s a complicated, non-linear tale that perhaps isn’t meant to be fully understood, but does a better job letting us in as the evening wears on. 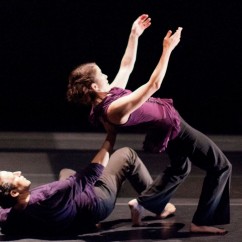 The characters are less obtuse. Rodriguez Cintra, filling the Detective Rough role originated by Tim Heck, and A. Raheim White as the charming maid Nancy make their parts their own; like most Lucky Plush works, each character is infused with the dancer who plays it, further muddling the divisions between studio and stage. This is intentional, and leads to the majority of the laugh-out-loud moments from these two bumbling sidekicks. Not to leave out the always-charming and whip-smart Wilkinson, who masterfully captures a naïve and slightly dim-witted version of Elizabeth Thompkins.

Heather Gilbert’s lighting accentuates the action, except when it doesn’t. Harsh boxes of light on the floor portion off landing pads for the characters each time they return back to the beginning of a sequence and start over. Rectangular strips of white light give each character a runway for their individual movement motifs, and, in lieu of lots of props, light and gesture are used to indicate landmarks in each scene, most notably, the door through which Mr. Manningham repeatedly leaves. But some of the richest and most beautiful phrases of partner dancing, done by Wilkinson and Rodriguez Cintra, are left completely in the dark, plopped beside a structural beam in the performance space’s upstage right corner and only seen by squinting, thanks to a glow of light meant to highlight the other performers.

Then again, making a few choices that don’t make sense to me are in keeping with the spirit of this work, giving a moody noir feel consistent with “The Better Half’s” inspiration. So maybe, it’s all exactly as it should be.

“The Better Half” continues through November 18 at the Steppenwolf 1700 Theatre, 1700 N. Halsted. Tickets are $40, with a $25 industry night on November 12 and hot deals available at seechicagodance.com/event/better-half-0.