A historic and rare constellation of forces conspired to bring this wonder of artistic and administrative partnering to life in Lyric’s first-ever collaboration with the superb Joffrey Ballet.  Happily for Chicago audiences, it’s not the last, with Lyric’s announcement Friday that the Joffrey will become the Lyric Opera’s resident ballet company, beginning in the Fall of 2020. If the Lyric’s production of “Orphée et Eurydice” is any indication, it’s a marriage made in heaven.

The use of dance in opera is nothing new—Gluck composed additional orchestral passages for the 1774 Paris revision of his original 1762 “Orphée” with the express purpose of adding more ballet music to satisfy his dance-loving French audiences—but dance in opera has been traditionally a peripheral element, an adornment, diversion, or entertainment. Neumeier’s production, truly an operatic ballet from beginning to end, exemplifies a level of artistic unity of dance, music, theater, and visual design rarely seen in opera, much less in any other form of theatrical performance. Here the centrality of dance weaves all aspects of the storytelling together, integrating the Joffrey’s stellar dancing, the staged singing of Gluck’s transcendent music, and even extending to the rhythmic rotations of Neumeier’s geometric set.

Gluck’s stated objective in his retelling of the myth of Orpheus was for the music “to serve poetry by means of expression and by following the situations of the story, without interrupting the action or stifling it with a useless superfluity of ornaments.”

In faithfully following the original libretto, Neumeier has drawn on his richly metaphoric imagination and modern sensibilities to fulfill Gluck’s musical intention and expand its vision for today’s audiences with the emotional force of Orphée's tragic loss. 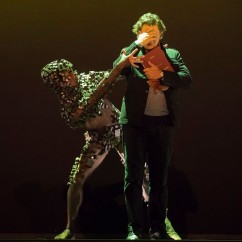 In the original myth, and in most subsequent theatrical renderings of the story, Orpheus is a musician who sings and plays the lyre with such beauty that he charms even the gods. When his beloved wife, Eurydice, is bitten by a snake, dies, and is taken to the underworld, his singing melts the hearts of the Furies and the three-headed dog, Cerberus, who guard the gates of Hades and try to block his way when he seeks to retrieve Euridice, and bring her back to the land of the living.

Gluck altered the original story by creating a happy ending for Orphée and Eurydice. In his version, even after Orphée succumbs to his wife’s protestations and he turns to look back at her, causing her second death, Euridyce comes back from the dead a second time, to return to Earth with him alive. 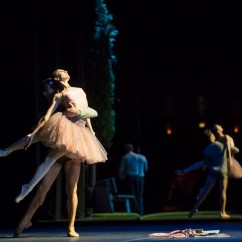 Victoria Jaiani in "Isle of the Dead"

In Neumeier’s version, Orphée is a modern-day choreographer rehearsing a new ballet , “The Isle of the Dead,” inspired by the Arnold Bocklin painting of the same title. His wife, Eurydice, is to dance the lead role, but when the two quarrel over her late arrival for rehearsal, she storms out and is promptly hit by a car and killed in the street outside the studio.  The ballet within a ballet/opera construct allows Neumeier to explore the dream world of Orphée’s imagination in the greater context of the Greek myth. 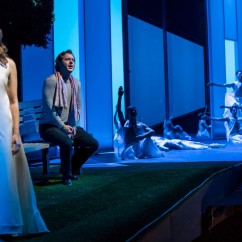 Without altering Gluck’s  libretto or music, Neumeier’s version restores the original myth’s bitter consequences, but with a modern psychological twist. As Orfée, returning to reality, sings, “What have I done? My love has destroyed me,” Neumeier brings Euridyce back on stage as a spectral vision in bridal dress and veil, hauntingly elusive as a spiritual, but not corporeal, presence in Orphée’s mind. A trio reaching sublime musical heights of intertwining melody between Orphée,  Amour,  and Eurydice ensues, she singing of her eternal love for Orphée but leaving him, ultimately, to confront the painful reality of her loss. 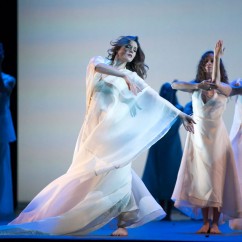 Andriana Chuchman as Eurydice in Elysium

Placing the Lyric Opera chorus in the orchestra pit and using the Joffrey Ballet, 43 dancers strong, as the on-stage visual and physical activation of the chorus’s singing gives the staging an expressive range and depth that would be impossible to achieve with a staged singing chorus.

In Act One, the arabesques, pirouettes, sissones, and port de bras of conventional ballet in Orphée’s real-world choreography contrast sharply with impulsive lamentations of the “off-stage” ballet dancers when they discover their colleague Eurydice’s catastrophic death. As Orphée sings a mournful aria, the dancers surround him and become the visualization of his sung words, at once commiserating with him as scene partners and amplifying his emotions in the abstracted gestures of contracted bodies and contorted arms and legs. The delicate interplay of choreography and staged acting in this scene typifies Neumeier’s concept of totally-integrated theatrical elements, intensifying the impact of both the singing and dancing as they blend together as total theater.

In Act Two, The Furies, in snake-like headdresses and flowing Greek skirts, surround Orphée in a frenzy of haywire madness, spastic lashing and jerky kicks, trying to stop him from entering Hades.  In a long orchestral passage, the fearsome three-headed dog Cerberus, portrayed with mongrel intimidation by Edson Barbosa, Dylan Gutierrez, and Alberto Velazquez,  define the underworld as a dangerous place with double tours, split leaps and scissors kicks. Orphée’s determination and the ardor of his love for Eurydice melt their resistance and persuade them to lead him to her where she dwells in idyllic Elysium. 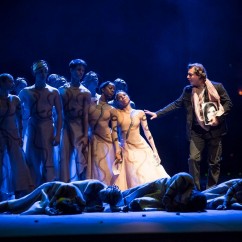 Victoria Jaiani and Temur Suluashvili, as doubles for Orphée and Eurydice in Elysium, equal the exquisite lyricism of their singing counterparts, Russian tenor Dmitry Korchak as Orphée, and Andriana Chuchman as Eurydice, in an impassioned love duet. Chuchman’s Eurydice holds her own in movement as well, dancing with Jaiani and the Joffrey corps to one of music’s most beautiful pastoral melodies. 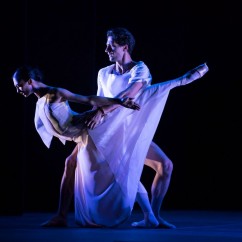 The poetry of Neumeier’s production extends to the sets and the choreography of their movement, powered by the dancers themselves. Through a minor miracle of technical lighting, the towering mylar panels that frame the Act One rehearsal studio at the beginning of the opera act as mirrors that reflect and distort the stage action, then become translucent filters through which we observe a visualization of Orphée’s thoughts and memories.

The mylar panels also represent the threshold that separates dream and reality, opening up as Orphée steps into a bigger-than-life backdrop of the Bocklin painting. In one of many striking visual effects, naked hands and arms reach out through apertures in the canvas toward Orphée, leading him into the underworld.

Lyric Opera’s premiere of Neumeier’s “Orphée et Eurydice,” co-produced by the L.A. Opera and Staatsoper Hamburg, is nothing short of a historic, precedent-setting theatrical achievement. The totality of its theatrical integration of so many elements at such a high level of artistry raises the “barre” on a trend that already has established healthy cross-pollination across the arts in Chicago. Saturday’s roaring opening night crowd affirmed our gratitude to Lyric Opera of Chicago for shining a bright light toward the future.