The MCA experiments with DIY art in 'Last Audience,' a dialogic, at-home performance on reckoning and remembrance

While COVID-19 has flatlined many curatorial projects, the Museum of Contemporary Art Chicago (MCA), like many cultural art houses and performance venues, continues to explore ingenious ways of presenting and connecting artistic communities, albeit virtually. This year, the MCA partnered with artists and institutions nationally, hoping to present works that could be accessed at home through a combination of internet, phone, mail and interactive live events.

On Saturday, the MCA presented an enact-at-home performance of “Last Audience: A performance manual” by Puerto Rican born, New York-based artist Yanira Castro, followed by a talk back with executive director of the MAAFA Redemption Project, Marshall Hatch, Jr.

“Last Audience” created an experience acknowledging commonality. It was a performative conversation rooted in historical conjurings, offering insight, hope and new possibilities. A performance manual—grounded in symbolic references and trumpeting difficult themes of mercy, blessing, judgement and reckoning—marshalled this physicalization motivated by text, voice and memory. The experience was an artistic assimilation encouraged both as a communal act and a complicit gathering to excavate and dismantle oppression in order to rebuild.

Saturday’s witnesses were invited to perform a score called Dust, which escorted us as we gave ourselves permission to participate from whatever spaces we occupied. I felt like a cheat, robbing myself of the full experience; as much as I wanted to obey the commands from the computer screen, I was more compelled to watch—to keep writing, participating in my own way. Sensing. Breathing. Believing.

David Thomson’s voice climbed beyond the boundaries of the computer as an accompaniment—an urge. Dance artist Devynn Emory pressed their palms upwards before shaking their hands with seemingly interlaced fingers. There was a quietness in Thomson’s tone and the same tranquility was felt from Emory’s sagacity. Emory’s gestures didn’t particularly mesh with the directives of Thomson, but that wasn’t the intent. Emory’s tightened fist pounded their chest as they stared into the camera. They offered one hand, placing it on their midsection before raising their index fingers, moving them in a circular motion. Round and round, never stopping. One thing was for sure: Emory’s finger would always end up where it started, only to continue from where it ended. A movement gesture symbolizing continuity. A warning, perhaps? A hope? A prophecy?

Similar to the dance of American Sign Language or the efforts of a person who zealously gesticulates, the hands speak. Whether it’s in a touch or the mien of the skin, the hand moves as it communicates. With their hands framing their face, Emory summoned us to take notice.

There was a shift from movement to moderator, as Tara Aisha Willis, associate curator of performance and public practice at the Museum of Contemporary Art Chicago, co-facilitated a talk back with assistant curator Gibran Villalobos. Willis spoke of the project as a conduit for confrontation, interrogating ideologies of reckoning and remembrance. As Willis shared, she reminded us that this event was not the actual performance, but that the performance was what we did with the manual when we got it (participants receive copies in the mail) and how it showed up in the world we inhabited.

Airing from Brooklyn, Castro, the lead artist in the interdisciplinary arts collective called A Canary Torsi, asked, “How do we reckon if we don’t remember? What is adequate action?” After creating the “Last Audience” as a map guiding this live performance, Castro expressed she wanted it to allow for a transformation that could be seen and performed by anyone. She hoped the audience would have an interpretive experience, all while harping on thematic concepts of requiem, grace and rest. Known as an artist-activist, Castro’s examination of history coerced her to create “Last Audience” as a call to action, remembering that we are being judged by the past. 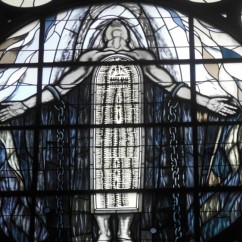 Hatch spoke of reckoning as he situated the MAAFA window. He explained that the word MAAFA comes from the Kiswahili word meaning “disaster,” asserting that it is used to reference the history of the transatlantic slave trade and the Middle Passage. In his oration he helps us reckon with our understanding of remembrance, explaining that the idea for installing that window was for it to serve as a memorial of our ancestry. Like Castro, Hatch clings to symbolism, asserting the window also serves as a call to action. He enunciated, “Remember this is stolen land. The country we inherited was built on the backs of enslaved people.”

“Last Audience” is a kind of subversion. So is MAAFA. Both motivate shifts in self and systems.

In a moment of transparency and self-reflection, Castro questioned why she was asking the audience to get on their hands and knees. But she quickly offered, “We need to experience this. We need to get on our hands and knees to ask for mercy.” She points out that collective actions force change. Hatch added that kneeling is not just an act of submission but a symbol of humility.

As participants were asked to engage in one last activity from the manual, I kept thinking how the conversation was a masterclass in art activism, liberation and survivorship.  We were given instructions to choose a cooking pot and a spoon, selecting them for the sounds they made. We had one final score from the book of 28 to perform: Thunderous Clash. The banging of pots and pans is a form of protest known as the cacerolazo, where protestors create noise, bringing attention to injustice.

“Last Audience” offered a reimagining of performance, but the talk back called for an examination of self, asking us to bridge said self to particles promising probability. It offered room for us to archive our voices, finding possible answers to our many “whys?” And as Zoom showed participants in their various physical orchestrations, there was a communal call to action, one that was born from the sounds that radiated into chaos.