Moving on: Joanna Wozniak’s life after two decades with The Joffrey

After 20 years of performing with The Joffrey Ballet, dancer Joanna Wozniak traded in her pointe shoes for a corporate job. She also got married and is living an entirely new life. Her official last day as a ballerina was June 1, 2021, but she’s still adjusting to days filled with data and computers instead of plies and tendus. I spoke with her last month about the transition and what she’s doing now.

Wozniak is currently a senior consultant for HBR Consulting, working in the data science field advising top law firms. But to get to this point, we need to go back a bit. While still dancing full-time, Wozniak decided to take classes at Harold Washington College to “keep plan B alive,” as she describes it. After receiving her Associate in Science degree, she took four years off from school to dance and travel the world. The academic bug called again at age 30, and she enrolled at Northwestern University to study organizational behavior. During that time, she tore her ACL in a rehearsal and went to school full-time to complete her degree as she was recovering from surgery. At her graduation ceremony at the Auditorium Theatre—on the same stage where she performed with The Joffrey—Wozniak heard the term “data science” and was intrigued. Never one to shy away from hard work or a challenge, she went on to receive a Masters in Science in Analytics (MScA) from the University of Chicago, which led to her new consulting gig.

What is data science? “It’s artificial intelligence, machine-learning algorithms and modeling data,” Wozniak said. “There is a lot of data capture and organizing data.” Her dance background plus the fact that she was Joffrey’s union representative for four years and still serves on AGMA’s board, informs her job every day.

“Dancers are passion-driven and tenacious,” Wozniak said. “If it takes us additional hours to accomplish a goal, we’ll do it and my union experience gives me informational relevance when working in legal.” While thriving in the business world, Wozniak admits she’s still finding her way outside ballet. “Being a dancer, you have a very defined sense of purpose. You have class, rehearsal, performances…you have time off and then the next show,” said Wozniak. “In this new work, it’s not as easy to define.” 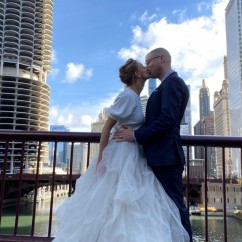 Another life transition also happened this year when Wozniak got married. “It was a total COVID-style wedding,” she said. “Hey, let’s go to dinner. Let’s get married!” With a designer belt gifted from her mom, her sister’s skirt, a dress from David’s Bridal and flowers from Whole Foods, Wozniak shared vows with her wine-and-culinary expert partner at City Hall. The photographer? A selfie stick with a stand and remote controls. The reception? Watching a football game and going out to dinner. “That was it. It was a Monday.”

Growing up in the suburbs of Chicago, Wozniak began dancing (focusing on ballet) at the age of seven. Studying under the tutelage of Sherry Moray and Kenneth Von Heidecke, she danced in “The Nutcracker” with the Chicago Festival Ballet before heading to The Harid Conservatory at age 14. After one year, she moved back to the Windy City and expanded her training with jazz, modern and Graham at the Chicago Academy for the Arts, where she met local-legendary teachers Randy Duncan and Ginger Farley, and future Joffrey friends Michael Smith and David Gombert.

After auditioning for Joffrey at age 16 (“I lied and told them I was older”), she joined Alabama Ballet as an apprentice but missed her family so she moved back home and got a job at Starbucks. “I was trying to adult,” she said.

Wozniak started as a seasonal dancer for Joffrey at 17 and officially joined the company two years later, dancing works including “The Nutcracker,” “The Taming of the Shrew,” “Les Noces,” and “Le Sacre du Printemps” at the Kennedy Center. “My contract came from Mr. Arpino (co-founder of the Joffrey) and that meant the world to me.” Memorable highlights during her career there are dancing in Sir Frederick Ashton’s “Monotones,” Twyla Tharp’s “Nine Sinatra Songs,” an original role in Val Caniparoli’s “Incantations,” and the coveted solo role of The Chosen One in Joffrey’s reconstruction of “Sacre.”

With such a long, diverse and productive career, why retire? “There are a couple of factors that overlapped,” she said. “COVID has been hard for a lot of people. It really disrupted the arts community and there is the reality that we do get older. I didn’t think I’d still be dancing at 25, let alone 37. COVID is bigger than all of us. It completely changed the game and we haven’t seen the end of it. My last six months at Joffrey was just us taking care of each other; it wasn’t about the dancing. At some point you just have to start the next step in your life.”