Ohad Naharin’s evening-length “Decadance/Chicago” brought Hubbard Street’s 40th  anniversary season to a spectacular finish in a custom-tooled re-imagining of Naharin’s best known works.  HS company director Glenn Edgerton’s hope was to extend “Minus 16”  (1999), which made its US premiere in 2000 with Hubbard Street, into a full length work for the company. Naharin obliged, splicing beginnings, middles, and endings from various other works into the mix.

“Decadance” is a choreographic collage Naharin assigns himself every ten years with different companies, each iteration unique to its host company. Hence, “Decadance/Chicago” became a Hubbard Street world premiere. Word-play in the title suggests the capriciousness on the edge of every breath.  Lyricism, irony, sensuality, social commentary, and borscht belt humor are in bed with each other in a bedroom where the logic of dreams and nightmares dictates reality, and movement non-sequiturs flow together with organic ease.

Naharin, a world-famous choreographer and director of Israel’s Batsheva Dance company since 1990, is also the innovator of “Gaga,” a movement method he has developed over the years through research and experimentation in the classroom.  The Hebrew word, "gaga," is the name of a popular Israeli summer camp game similar to volleyball, which translates  as "touch touch," but it is also a verb which means "longing" or "yearning." Both the playful volleying and tactile aspects of the children's game and the deeply emotional source of yearning are equally present in Naharin's choreography, which embodies gestural outbursts such as rattling of the fists, whole body oscillations, wild kicks, sudden elevations, and falls that alternately collapse the body or assault the floor. But just as often, he mixes in expansive lyricism in sequences with sudden dynamic contrasts, all of which combines to create a stunning and visually arresting movement palette.

Gaga is “the toolbox,” Naharin says, not the choreography, but he finds it hugely helpful in facilitating collaboration with the dancers in the rehearsal process. Gaga is not about steps, and has no codified movement vocabulary, but rather focuses on liberating participants to discover new possibilities in their own body/mind process to achieve greater freedom and range of expression, self-awareness, and the ability to “listen to the body before telling it what to do.”

Gauging from the raucous choreographic range on display this past weekend at the Harris Theater, Gaga was very much in play in Naharin’s creative process with Hubbard Street.  Being “in the moment” is an essential quality his choreography demands, and at which Hubbard Street excels.  He has the uncanny knack of putting his audience “in the moment” as well, gently commanding our participation with humor and disarming us with surprises throughout the evening. Hubbard Street, for their part, embraced Naharin’s physically demanding work with every corpuscle of commitment, technical virtuosity, and artistic nuance, demonstrating once again their extraordinary versatility as a company.

To start, the curtain rises on a montage of 17 dancers in an assortment of colorful t-shirts, jeans and leggings, posed, as if for a class photo, in four tight rows of ascending levels. An announcer dressed in the recognizable uniform of your average Hasid-on-the-street—black fedora hat, black suit, white shirt buttoned at the collar with no tie—enters stage right. He pulls a written script from his jacket pocket and begins to read in a stiff, halting monotone, with deadpan expression. The instruction is to silence cell-phones, but it becomes a humorous invitation to the unexpected. 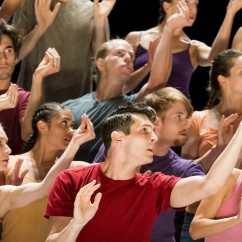 Remaining stationary, the dancers animate instantaneously with emphatic arm gesticulations, something that brought to my mind a physical caricature of the cacophony of orthodox Jewish prayer called “davening.” Naharin, who grew up in Israel on a kibbutz, reflects all layers of his country’s social strata, from ultra orthodox to ultra modern, but the dominant characteristic of his work is the universality of its untamed freedom to access impulse, connecting movement to the core of the body’s emotional engine.

Structural patterns emerged among the different segments of the evening’s work. Naharin makes pointed use of repetition, coupled with add-ons that continually circle back to beginnings.

In one segment early on, a sea of dancers inundates the stage with forced, unwavering smiles pasted across their faces. Bopping hips and pointing index fingers to a disco beat, they become a moving billboard for the superficiality of popular media. This goes on without variation for some time, which has its own strange logic, and concludes abruptly with the dancers dropping affect and simply walking off stage, a convention repeated several times throughout the evening.

A women’s quintet begins with a voice-over narration admonishing to “Ignore all,” to which the group responds with a single gesture. Parallel monologs, five in movement and one in speech, build, word by word, gesture by gesture, and phrase by phrase, circling back and repeating movement and speech from the beginning with the introduction of each new word or movement. “Ignore all” becomes “ignore all concepts and possibilities.”  Then, “Ignore Beethoven.” What follows is an unlikely set of add-on instructions for living a life of material comfort and superficial values—“Just make it, Babe!”—embodying both the sting and humor of irony, and clearly the antithesis of Naharin’s life philosophy. 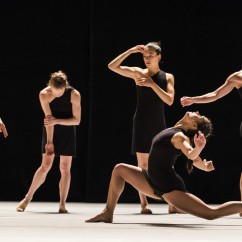 While the originality and contrasting riches of the whole evening left a lasting impact, the return of the black-suited announcer for an act one interlude takes the cake for audience participation and comic relief. In his halting,  deadpan delivery, he commands the audience to stand. “If….you have great grandchildren….you may….sit down!”  Numerous qualifying categories, some hilarious, some embarrassingly brazen, entitle us to sit, as well as to observe who among us is sitting or standing, cleverly transforming an audience of strangers into a community of delighted participants.

This led to the re-entrance of the company, 19 dancers in all, identically dressed in the black-hat, black-suit uniform, dancing across the footlights and into the audience to “Somewhere Over the Rainbow.” The dancers each enlisted and escorted an audience member to the stage to dance with them. It may have been a gimmick, but it was quite marvelous to see a cross-section of non-professional dancers from the audience happily improvising with the dancers in a “Gaga-esque” demonstration of solidarity. You couldn’t help but contrast what we were experiencing together with “Ignore all concepts and possibilities.”

Repetition and add-on structure reached its zenith in Naharin’s excerpt from his ballet, “Seder.” Perhaps my favorite part of the program, at least the most emotionally intense, although it’s a tough call, “Seder,” which means “order” and is the name for the service and meal observing the Jewish festival of Passover, had the 19 “Black Hats” seated in a stage-wide semi-circle of folding chairs and moving sequentially like dominoes to the Hebrew words of the Passover add-on song, “Who Knows One?” The intensity and emphatic dynamic of rapid-fire gestural sequencing brought to mind the ecstatic  dance of certain Hasidic sects.  The sheer repetition and passion of vibrant moves along the chain of chairs transcended the physical realm and became almost a form of prayer, a secular celebration of life and of Naharin’s roots. If you knew the words, this made even more sense, but Hebrew 101 was not a prerequisite for experiencing the powerful impact of the movement. 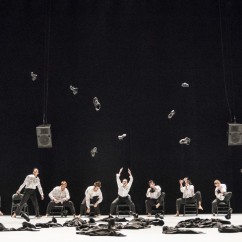 It’s far too tempting to go on, with so many delicious component parts to the complex and exceedingly rewarding “Decadance/Chicago.” Let me simply conclude with an enormous thank you to Glenn Edgerton, and to the incredibly gifted Hubbard  Street dancers for giving their Chicago audiences the inspiration of Ohad Naharin’s genius.