A few years ago, in the middle of February, severe low temperatures temporarily closed Oak Park's Academy of Movement and Music. That day, studio founder Stephanie Clemens received a call with a question from her son in Arizona. If he bought a house for her, would she come there? Clemens didn't hesitate to answer yes.

Already considering a retirement plan, that call set the wheels in motion for Clemens. “I decided I would retire at age 80, after 50 years of teaching,” she said in a phone call with See Chicago Dance. “Those 50 years have all been a labor of love, with not many negatives,” Clemens said. “But you do get tired. In all of that time, I've had two 2-week vacations.”

Clemens' impact has been profound. Her teaching years began with modest living room classes for neighborhood kids in 1971 and grew to the Academy's current home in the old Bishop Quarter Military Academy, a 12,000 square foot building housing four studios and a performance space. As the studio grew, Clemens traded office work for space rental, got a $3000 "grant" from her mother to install a wood floor in her first storefront space, and eventually bought the current building in horrendous condition with “trees growing out of the gym floor.”

In Los Angeles, as a child, Clemens had been advised by neighbor and former Ballet Russes dancer Adolph Bolm to study ballet with Lila Zali. Clemens did, and later went on to Juilliard, gleaning technique from Anthony Tudor, Lucas Hoving and Martha Graham, among others.

At the Academy, Clemens sought out her staff of top teachers with different specialties. “I've always liked hiring people who could do things better than I could,” she said. Over the years her own star-studded teaching staff included Larry Ippel, Ernestine Stodelle, Juanita Lopez, Lori Bellilove, Sandra Kaufmann, and Randy Duncan among many others. 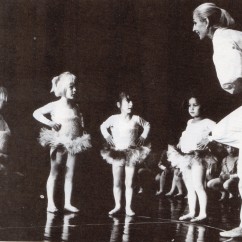 Clemens, right, in 1992 with Academy students. Photo by Anne Bradley An innovative and creative leader, “Stephanie brought in remarkable artists and managed to do it with no money,” said Kaufmann, who made the commute from Brookfield to take advantage of Clemens' world class offerings. Initially training with Clemens as a teen, Kaufmann went on to dance with the Martha Graham Dance Company, and now directs the dance program at Loyola University Chicago. At first, Kaufmann felt both intimidated by and attracted to Clemens' elegance and well-cultured manner. “Stephanie took a genuine interest in me,” she said, “and that's what drew me in. But she did this for so many others too. She's deeply devoted to the creative process and to arts education.”

“There were years when I taught 40 classes a week - on average maybe 10 students per class,” said Clemens. Teaching thousands of students in all levels of ballet and overseeing day to day operations at the Academy, she built a thriving community. Placing priority on creating opportunities for others, she welcomed students of varied abilities, spearheaded scholarships and wrote countless letters of recommendation. Many Academy students have gone on to professional careers.

Tatiana Castañeda's career came full circle, first training and now teaching at the Academy. She echoes Kaufmann, saying, “Stephanie built personal relationships with all of her students and staff. She wanted to see them succeed in every way.”

To strengthen the performance component at the Academy, in 1983, Clemens oversaw a conversion of the previously decrepit gym into a fully functioning black box theater. Then, along with Ippel and James Tenuta, she co-founded MOMENTA Dance Company as a vehicle for professional performance. MOMENTA represented a shift away from ballet and toward modern dance for Clemens. “I love ballet, but after my Juilliard training, I felt dismayed,” she said. “I was 6'3” on pointe and was never going to be my idol, Margo Fonteyn.” Starting with a repertoire of original works, by 1988 the company began remounting historical works, particularly those of Oak Park-born Doris Humphrey featuring Clemens dancing many lead roles. 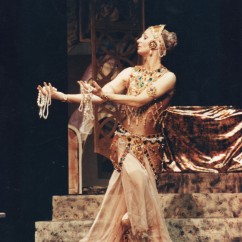 Clemens dancing Ruth St. Denis' "Radha" in 1993. Photo by Judith Gilman At age 50, after reconnecting with her childhood babysitter, Karoun Tootikian, Clemens reached a pinnacle of her performance career. Tootikian, a dancer in the original Ruth St. Denis company, recreated St. Denis' solo repertory on Clemens over the course of 10 years. From age 50 to 60, Clemens became the only dancer to perform a reconstruction of St. Denis' three solos from her Hudson Theatre Concert in 1906. “I'm lucky I got away with it!” she said, laughing.

Clemens’ proudest moment was actually seeing her youngest son at age five on stage as a bunny in the Ruth Page “Nutcracker.” Her three sons trained through the Academy but it's the youngest, JP Tenuta, long after that first “Nutcracker” and following a prolific teaching/performing career, who will take over the studio. Challenges await Tenuta in the wake of COVID-19, particularly rebuilding classes for small children. But Clemens says he's got a great staff and team of teachers to make a smooth transition.

The pandemic undermined retirement plans and presented Clemens with the biggest hurdle of her teaching career. What was to be involvement in her final recital—including restaging part of her choreography to Vivaldi's “Four Seasons” from her first Academy recital in 1977—instead became what she felt was a disappointing virtual showing of classwork. “Before the vaccine, I was going in to teach feeling terrified every day,” she added. “That is not something I wanted to feel in my last year at the school.”

May 19 marked Clemens' final day of teaching at the Academy. “It was kind of a strange quiet ending, mopping the floor with sanitizer,” she said. For her last official Academy task in early June, she guided a group of 6th and 7th grade dancers through rehearsals for their virtual recital. Following the taping, “I was surprised [by the students] with armloads of flowers, cards and tears.”

Downsizing over the past three years, Clemens reduced her personal 5,000 book collection to a manageable 200. Parting with the books brought fear that she'd forget anything she's read. “Books are like my brain cells,” she says. So, her extensive dance book collection will remain intact at the Academy. Her legacy also includes the establishment of the Stephanie Clemens Equity Initiative, a fund for creating scholarships for students of color. And her influence on countless dancers across the continent will carry on. Castañeda attested, “I would not be the dancer, teacher or person that I am today without the mentorship of this truly inspiring woman.”

Although leaving Oak Park, finally making the move to Arizona, Clemens isn't slowing down. She envisions herself lecturing on Humphrey and Loie Fuller, sorting her memorabilia and archives, and perhaps writing a memoir. She is ready to move on, but it's bittersweet. “I've had a marvelous time,” she said, “I just wish I could do it all over again.”