Our Readers Write: Dark from the inside out

Editor’s note: The 2021 Our Readers Write column is a curated collection of articles and creative writing by various members of the Chicago dance community. We hope to provide our readers with expanded perspectives on both dance writing and the artistic lenses of the contributing authors. Taimy Ramos Velázquez, a 2020 Links Hall Co-MISSION fellow, kicks off the series with a sample of the sculptures she often uses in her performance work—and the storytelling that accompanies her creative process. —Jordan Kunkel

A body of inert matter moves slowly through a space of dense consistency. He cannot see his own hands; he cannot see his own feet. Unimaginable darkness soaks everything around him. This body has very long and thin fingers that end in balls of rotten flesh without nails. His jaw drops under the weight of his tongue which crawls across the floor, ripping against everything that stands in the way.

His mouth, ajar, reveals a total lack of teeth. He drags his sorrows through this space, dark like the darkness inside a dark hole on the darkest day of your life. This inert body advances with its two arms, two elbows, two legs and one eye—accompanied by a thousand worms: toothless, with fleshy tendons and veins dripping mud onto himself.

Though he moves through life in this world the same as you and me, he emits an imperceptible sound for those of us who have chosen to follow a different path. His vocal waves are not compatible with our ears, almost as if he does not exist. Or as if he shares the same time but not space as the rest of humanity, stuck in a parallel dimension.

A shackle of crushed stone echoes inside his gut as he crawls past you. His mouth leaks a stinky and acidic drool, which has cooked his skin over time leaving it covered with yellow bubbles and sores. The holes where he once had eyes are now filled with dirt and the entrance of his ear canals are plugged with cement, rendering him deaf. He can no longer hear even the inner voice of his conscience.

I will never understand why he underwent this brutal death within his life. Or why this man made us witnesses and sometimes victims of his nauseating and horrifying essence. He wasn’t always like this; he was not born this way. Rather his metamorphosis occurred over time, by his own choice.

He breathed for the first time without anyone having told him how to do it, simply by instinct and evolution. He was small, and with eyes still closed, he already knew what to do in his first seconds as part of this world. He remained connected to his mother by a magic cord of approximately 50cm that supplied him with food and air for months.

In the blink of an eye, the key to this oldest an unknown world was severed, making him an inhabitant of this world. You can still see the mark on his abdomen of something that was there and is no longer there, but that could develop again and perhaps lead to an infinity of undiscovered universes. We all came from the same place he came and were also nurtured by the magic cord, but for some reason we were condemned or (blessed, I don’t remember) to not carry any memory of it.

This unclean being was born from a healthy body. In his beginning, he was made up of lively matter, and on that glorious day of his birth, he experienced crying, air and light. He felt the touch of his mother’s warm arms against his skin and tasted colostrum for the very first time. Thanks to that holy white liquid he was shielded from the inside.

And so began the story of this body that continued to grow, breathing the same air that we all breathe and experiencing new adventures just like the rest of us—some good, others horrendous. What really determined his mutation into his current (very deserved) existence, were the decisions he made in response to these experiences.

His first cell died when one day he ignored a hand that asked for help. He lost much of his living substance when he began to judge others for fun and without empathy based on banalities such as beliefs, skin color, height, money, body type, food choices, sexual preference, religion and some other equally stupid reasons. Another disastrous day he decided to hit and bleed a living being for no reason whatsoever.

But what really defined whether he was composed of active or inert matter was each day choosing to repeat these actions like a grinding machine with no bit of thought or consciousness. That’s why he is still there: hanging in the limbo of the dead of heart, moving ever so slowly through a dark and cold space, attempting and failing to purge every moment of his bitter existence from his mind burned by pain. He has been sentenced to remain there forever if necessary, until he can break free of the many errors and faults that murdered the light of his complete existence. Only this way will he be granted a cord through which to breathe and feed again.
--

Taimy Ramos Velazquez is a 2020 Links Hall Co-Mission fellow. She will perform and showcase her art at the 2021 Co-MISSION Festival of New Works at Links Hall on Saturday, May 22 at 1:00 p.m. and Friday, May 28 at 7 p.m. via YouTube livestream. The festival runs May 20-30 and free tickets are found at the event link below.

Interested in contributing to See Chicago Dance’s Our Readers Write column? Fill out our survey. 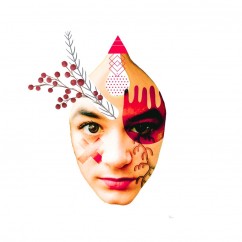 Taimy Ramos Velázquez Taimy Ramos Velázquez is a dancer/choreographer raised in Pinar del Río, Cuba. Taimy graduated from the National School of Dance in 2008 and became a company member of one of the most prestigious Havana-based Dance Companies: Danzabierta led by the Spanish choreographer Susana Pous. With DanzAbierta, Taimy taught and danced in several international tours in major dance festivals around Europe and America for 8 years. In 2016 Taimy moved to the United States, where she has danced for Companies such as: Hedwig Dances and CDI Company. Taimy currently works as a freelance artist.