How do artists approach violence as both subject and action in performance? How are audiences complicit as witnesses to acts of violence on stage? How can we demonstrate our complex experiences of rage, grief and fear, and where do we find relief? These are just some of the questions inspiring the four-day Power Ouch Festival opening this week, Feb. 14-17 at Links hall.

When Links Hall, the beloved presenting organization and rental house, announced its unprecedented mission for their 40th anniversary season—the free-of-charge presentation of artists’ work on a first-come, first-served basis—movement artists Aurora Tabar and Carole McCurdy jumped at the opportunity to create a new show. Originally intending to perform their own work, they began to discuss the ways in which their individual research intersects.

“I was already engaged with thinking about violence as a topic for performance,” McCurdy said in an interview with See Chicago Dance. “I’d been developing a piece involving five inflatable punching bags called ‘Five Stud Stud,’ and right away issues of violence and working with the ‘other’ starting coming up for me, [such as] lots of personal issues about self-harm, intimacy and passive aggression – all of the things we live with every day but we don’t like to look at,” explained McCurdy.

“So, when we got together and started thinking about our performance weekend,” offered Tabar, “violence came up as something we were both interested in and wanted to explore more. Initially, we were both going to perform and were just looking to get a couple more artists to perform together. But once we started going we realized that it was way too much. We wanted it to be a weekend of other people’s work and we would be in this role of organizing the presentations of others’. For me that’s been a really satisfying role.”

As first-time curators, the duo centered their vision around two main criteria: who was already making work deeply invested in this theme, and who did they want to see represented on stage?

“In the beginning it was a group of all female-identifying people, and we realized that we needed to take a look at that,” Tabar said with a laugh. “We wanted the cast to be diverse in different ways, both in terms of how they look and how they identify, but also in terms of their practice. We have contemporary dancers, we have installation/performance artists, we have someone from a hip-hop background; I think this is really the work that we want to see and I think it’s gonna be weirder than a lot of the work that we sometimes see at Links Hall,” she explained.

Of course, a common thread among the artists involved in Power Ouch is that they are all deeply focused on the body as both the site and method of thematic processing.

“One thing that the body and movement-based performance can do is articulate things that go beyond verbal labels,” McCurdy says. “There are ways that we can feel into it in a way that’s isn’t about rhetoric or duality…and some of these artists are maybe more overtly articulating social or political arguments with their work, or certainly in the material that supports their work, but most of it doesn’t involve words or language. It’s the body. So that leaves a lot open to interpretation even if there’s still the sense of argument.” 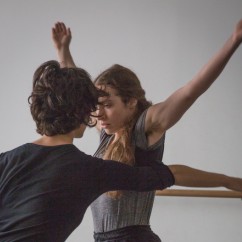 Eryka Dellenbach and Nola Sporn Smith, photo by Brandon Perdomo What might we see as the festival unfolds? Highlights include Eryka Dellenbach performing with Hanna Elliot and Nola Sporn Smith in a version of her ongoing performance and video project “Make the Brutal Tender,” an exploration of thresholds of tenderness, aggression, and the feminine “brute,” as described by press materials Juxtaposed with the male inverse of these themes is “Sword Fights and Other Things to Do With Your Manhood,” a new dance collaboration between Jeff Hancock, Joseph Hutto and Rob Welcher investigating how “touch is perceived by others, especially when that touch is intimate or gentle versus aggressive or violent.”

Meanwhile, interdisciplinary street dancer Cat Mahari uses krump and the Chinese martial art of chen taiji “to develop strategies for spiritual, martial, and transcendental apprehension” in her work “The solo mixtape series Violent/Break: Vol II.” And in the most visceral and potentially triggering demonstration of violence and collusion, Holly Arsenault’s performance installation “Punch Piece 11,” hacks into clay structures in a demonstration of mutilation, vulnerability and the fable of the innocent bystander.

The festival is structured with two to three performances each night, with a rotating match up of artists so audiences will have to attend more than one day of programming in order to see them all. But don’t worry; Power Ouch is not trying to wear you out with such a heavy subject matter; the idea is to find opportunities for release.

“Ultimately, we are interested in knowing what else can happen,” Tabar concludes. “Can there be some kind of catharsis or release? Can something be transformed? In Butoh, there’s this idea that lightness exists right alongside darkness. So, when we are grappling with all of these challenges, the frustration and the anger, is there space for something else to happen?”