Power passes from woman to woman: Germaine Acogny at JOMBA! 2020

Senagalese choreographer/dancer and founder of the world renowned Ecole des Sables, Germaine Acogny has long been regarded as "the mother of contemporary African dance." As such, it is apropos that for her appearance on the JOMBA 2020 Legacy platform she presented her critically-acclaimed autobiographical solo dance theater work, "Somewhere at the Beginning."

The piece is inspired by her father's autobiography, from which much of Acogny’s spoken text is derived. She opens the performance by reading the final sentence from her civil servant father's book, ironically imploring people to prioritize interdependent interaction regardless of individual origin or religion. One of the show's narrative pillars is grounded in the painfully powerful relationship dynamics between her paternal grandmother (a Yoruba priestess named Aloopho who died years before Acogny was born), herself (the declared reincarnation of Aloopho) and her father Togoun (a French-educated assimilationist who grew to disavow Aloopho's religious practices in favor of the "civilized" whiteness of Catholicism, yet clung to the hypocrisy of laissez-faire patriarchy). This core familial conflict feeds Acogny's reckoning of cultural and spiritual violence enacted by French imperialist erasure of indigenous African religious ideologies which revere matrilineal systems of power and are passed from woman to woman even if those women are generations apart.

Text, design and technology are the show's primary drivers (video by Sébastien Dupouey; Text by Togoun Servais Acogny, Aloopho, Germaine Acogny, Euripides (Medea); set design by Maciej Fiszer; and technical direction by Marco Wehrspann). For example, Fiszer designed an active set to support Acogny's travel between time, space and spiritual planes, a stage-length thread curtain serving to not only separate upstage and downstage, but also effectively delineate the past (upstage) from present pondering (downstage). Sparse props such as a down-filled pillow, a mobile easy chair and a bowl of flour aid the searing emotional impact of Acogny's non-linear testimony. The combination of Dupouey's dynamic video design and Acogny's choreography—a markedly nuanced series of movement codas, including a sequence of body tapping that resembles EFT—serve as the work's graceful transitions between vignettes and the text's embodied punctuation, respectively. The work ends with Acogny declaring, "Father, I am your mother. I forgive you." Should one have the opportunity, I highly recommend viewing the full performance to witness Acogny's riveting journey to her redemptive destination. 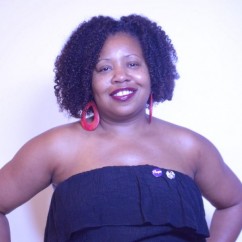