Molara Ogundipe-Leslie (1993) once asked, "Are African women voiceless or do we fail to look for their voices where we may find them, in the sites and forms in which these voices are uttered?" I open with this increasingly persistent question as it is one that I have been contemplating for some time now.  It is a question that remains pertinent in a world that is still governed by dichotomies that want to define us in absolute terms. A world that carelessly does not take into consideration the many boundaries that these dichotomies create and the people who live in the liminality of these boundaries. It is in these liminal spaces that Lorin Sookool's "Prayer Room" exists and from which it speaks.

As part of See Chicago Dance’s Screendance Club, “Prayer Room” was screened online April 28, followed by a moderated conversation with viewers and Sookool.

The film seeks the sites and forms of a particular community of elderly women living in Wentworth, Durban — a predominantly colored location on the east coast of South Africa —and literally amplifies their voices.

Colored. A derogatory term for some, depending on who you are and where you are from. A racial classification and identifier in South Africa inherited from apartheid, the word defines a group of people who are painted into the margins for not being white enough and not being Black enough. It is yet another liminality, based purely on the fact that they are generally from mixed-raced origins. When asked to speak to the coloured identity in South Africa and how she engages it in her work, Lorin not only notes the complexity of the politics behind her inherited classification, but also of the struggle to bring visibility to the injustices faced by this racial group whilst still honouring the individuality in which their boundary crossing origins are grounded. And It is seen in how the coloured community is underrepresented even in the South African dance community. And as Catherine M. Cole (2020) acknowledges, "Corporeal epistemes participate in the production of knowledge and the structuring of power. They are specific to a place and time.”

“Prayer Room” begins with the wiggling of a toe that protrudes from under an upside down church pew. A phone rings and warm greetings shared, by voices excited to hear each other, warm the room. The conversations that unfold between Lorin and the three ladies on these WhatsApp calls are the springboard for the dance work and double up as the soundscape.   These conversations, which gather energy and momentum, are layered and tacked together to sketch the hardships experienced during South Africa's hard COVID-19 lockdown. The conversations hurtle from lack of government support, to community organizing and faith. All gently held in a dignity and lightness that is relieving and comforting, even if you're not comfortable with the subject. The voices of Auntie Sakkie, Auntie Lorraine and Auntie Joyce (who is Sookool's mom), give us a glimpse into the day-to-day of these women and many like them, who are trying to find comfort and support in the time of forced isolation. They give context to the work, which at its heart speaks of community and how we build sacred spaces to be in communion.

Lorin, throughout our conversation about the work, was generous in sharing her process of making the dance film. She constantly acknowledged that this was not a solo work but rather a work that could not exist outside of the people who were involved, including the three ladies, cinematographer Tania Vossgatter and lighting designer Themba Mbuli. This acknowledgement of the community that she creates subverts the egotistical “I” for a “we,” wherein Lorin makes choices that reflect the humane need to build rather than to tear down. Letting us know that this daily ritual of calling was how the work got its name, as it was the old ladies who introduced the idea of church to the conversations. And although Lorin herself is not religious, she could acknowledge her own art making as a religious process. The entering into conversation therefore became an entering into their own prayer room. When asked how she traverses the age and religious gaps to build this community, she spoke of finding commonality rather than pushing against things to which she would not naturally gravitate.

In this way, her process begins to illuminate a way of being together and sharing community despite our differences.  She, like the women on the other end of the phone line, was left destitute by lock down and was forced to rely on hope and a prayer as uncertainty reigned. She took a leaf out of the old ladies' books, who sought to bring their church into their homes. Her church, which is her artmaking in the form of movement, finds transformation through communing with these ladies. She finds the confidence to take her improvisations for the first time into a performance realm rather than letting it only live in the privacy of her rehearsal, or rather prayer room.

At the closing of our conversation, I mentioned how I had been rudely awakened by a hard-hitting fact once bestowed on me by a friend: that hope is not a strategy. Hope may not be a strategy, but I offer it as a breathable, liveable place—at least for those of us of less fair skin. It is no secret that marginalized bodies have had to fight against unbeatable odds for an opportunity to lead dignified lives, often turning to what might seem like unstrategic methods, easily cast away as illogical or hocus pocus. Hope, like faith, is a state of mind. And as one of the aunties points out, you can't see faith, yet it has for too long been all that Black and brown bodies generally had. By the grace of prayer, hope, faith we are still here. And at the intersection of prayer, hope and intuition, Lorin breathes life into the truth of the present day. Creating a liveable space, a space where we can breathe and exhale. A place where breathing is not a privilege but just a basic right.

"Screendance Club: a radically casual watch-party, discussion of short dance films" takes place monthly. The next session, on May 26, will be moderated by SCD staff writer D'onminique Boyd in conversation with Cecil McDonald, Jr. about his work, "Pieta for America." To receive information about Screendance Club and other See Chicago Dance initiatives, sign-up for our newsletter or click the links below. For more information on Lorin Sookool's work, visit her website.

Editor's note: This piece will be published in isiZulu on May 6, with translation by Lisa Goldstone. 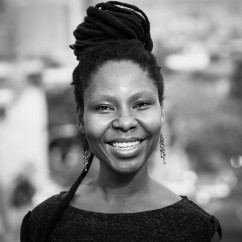 Thobile Maphanga Thobile Maphanga is a Durban-based dance practitioner, creative collaborator and emerging writer with a Bachelor of Commerce degree in Information Systems and Drama from the university currently known as Rhodes University. She is currently reading for her post graduate degrees at the University of KwaZulu Natal. She has worked both in corporate and artistic sectors and is interested in how these two worlds can interact and prove beneficial for all involved. Her recent work has been site specific and film based as she interrogates how we define and make purposeful the arts and the industry it sits in. She is passionate about engaging the public in dialogue around topical societal issues to find solutions for better living. And she is deeply interested in the various expressions of individual voices. Her dance career has spanned two decades, working with various South African Companies and choreographers. She has collaborated with local and international artists to produce independent work. She was a co-founder of The Rickshaw Collective, sits on the board of the Flatfoot Dance Company and is a part of the steering committee for the KZN branch of the I'm4theArts movement. She has recently started a curatorial mentorship with Dr. Lliane Loots, Artistic Director of the JOMBA! Contemporary Dance Experience and holds a position on the JOMBA! Masihambisane Dialogues steering committee.