RE|dance turns 10, with a call to action and dancing in a cloud

The tense national and international political climate and recent current events form the backdrop to "The Biggest Wail From The Bottom Of My Heart" and "What Love Looks Like," companion pieces that wallop a one-two punch, one aggressively dark in its energy, its counterpart lyrical and hopeful.

Estanich describes his work as reflecting “the urgency, need, and desire to reject ignorance. The work subtlety calls attention to revolution," he says. "Feelings of despair and uncertainty are powerful mechanisms for change. A personal voice is a powerful voice. This work is a call to action, a plea, and a proclamation.”

But as politically charged as the pieces are, their message is a-political: owning what you believe and taking a stand, whatever your point of view. Neither piece espouses a particular political agenda, but rather seeks to heighten people’s awareness of each other and of each person’s responsibility to advocate for what they believe.

Throughout both pieces, music, visual projections, and spoken text combine in brief layered scenes or chapters, performed by an ensemble of eight dancers. The text, drawn from Estanich’s own writings and quotes from various sources, is comprised of poetry, narrative, and journal entries. Spoken word serves several different functions throughout, sometimes as accompaniment to the dancing, much like a musical score, other times as a basis for dramatic interaction, or even as a chant-like protest with echoing call and response.

“Nowhere do they talk about politics,” Riner emphasized in a recent phone conversation with See Chicago Dance. Instead, she explained, “the pieces ask the audience to form your own identity,” with questions like, “Do you feel you have a voice, do you use your voice, and do you have a strong sense of what you believe?” 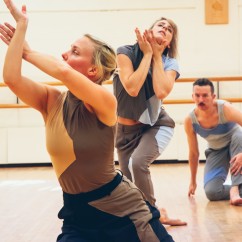 RE|dance group, photo by Matthew Gregory Hollis Rather than presenting polarizing perspectives, "The Biggest Wail From the Bottom of My Heart" seeks to inspire individuals to become their own personal change agents by embracing social action. “Have confidence to own where you fall and how you feel about that and the place where you make your mark,” Riner says. Issues of white privilege, guilt, coming out, what it feels like to be marginalized—racially, as women, as LGBT—all contribute to a piece Riner characterizes as “pretty aggressive.” Citing Cat Stevens’ “If you want to sing out, sing out!” incorporated into the sound score, she says, “We want to show through our dancing who you are, that we all have a voice and you can feel comfortable about showing that.”

The first piece, which has been evolving over the past two years, “happens in mostly blacks and grays,” Riner explains, with black and gray costumes and a black floor. Projections show a green patch of grass and a picket fence. “The set is picturesque, very Americana,” and the piece ends with the question, “Does the American Dream exist for everyone?” dissolving into tiny millions of pieces. “You feel like (you’re) disappearing, melancholy. It’s hopeful, but sad," says Riner.

After the intermission, the black floor is replaced by a white one, and "What Love Looks Like," set inside a cloud, is about “what can happen next,” wiping the slate clean. The dancers, now dressed in white, respond to the same poem used in "The Biggest Wail" so that audiences can “see how the poem takes on different meaning, more hopeful,” says Riner, “of what things could look like.”

"'What Love Looks Like' is my image of the future,” says Estanich, “where the possibility for love, sorrow, and spirited acceptance is made manifest and an idealized lightness prevails.”

“Our pieces always have something for everyone,” Riner explains. From high school students to millennials to older adults, responses vary. “Kids are less apologetic,” she says, more open, while some older adult audience members say, “You made me feel uncomfortable,” all of which is a sign that RE|dance group is achieving its objective of inspiring its audiences to engage.

Each of the pieces runs approximately 30 minutes, with an intermission separating the two halves. RE|dance group's 10th anniversary concert runs 7:30 p.m. Thursday-Friday, January 10-11 and 17-18 at the Hamlin Park Fieldhouse Theater, 3035 N. Hoyne Ave. in Chicago. Tickets are $20, with Hot Deals available by clicking the link below.