Remembering Miss Wills: "The good, the true, the beautiful"

In 1967, Phyllis Wills and fellow teacher Kerry Hubata had been teaching ballet at Gus Giordano’s Evanston studio for three and a half years. When it became clear that the ballet division of the school was not bringing in enough revenue to sustain itself, Gus reluctantly told them, “You’re free to open your own school.” They had no intention of buying the building on Central Street that became the Evanston School of Ballet. All they wanted to do was find a space to rent where they could continue teaching together. Today, some 53 years later, the school continues to thrive. Its legacy of excellence spans generations of students and reflects the unique dedication and indomitable spirits of its two founders.

Phyllis Wills Wagener was born in Anderson, Indiana, to Matrice Meyers and Buren Wills on October 8, 1922. Her parents divorced when she was quite young and Phyllis grew up with her mom, learning at an early age to be a strong, independent young girl growing up during the depression.

Matrice, a woman ahead of her time, owned her own beauty shop and supported herself and her daughter as a beautician, setting a strong example for her daughter as a career woman long before Women’s Liberation was a popular idiom.

Phyllis had dreams of becoming a professional dancer and set out for Chicago at the age of 18, only to discover that she had had bad training and was “not up to snuff.” She enrolled in the Gladys Hight School of Dance in 1940 and became Ms. Hight’s protégée. Hight gave her good grounding in technique and eventually hired her to teach classes in ballet and tap at her school. Miss Wills, as she was known to all, left the Gladys Hight School in 1956 and continued to teach one class a week on Saturdays in a rented space called “Rehearsal Center” at Randolph and Dearborn.

In 1957, Wills became a member of The Cecchetti Council of America, for which she was a frequent seminar presenter and speaker.

When Gus Giordano asked Miss Wills to take over as head of the ballet division of his studio, she said she would only do it if Kerry Hubata would share the responsibilities. Prior to her joining Gus’s school, there was no budget for accompanists; recorded music was used for all the classes. Having live music was such an important artistic component for Miss Wills’ teaching that she paid for an accompanist for her advanced class out of her own pocket. She and Hubata taught at Gus’s studio for three and a half years, through 1967. 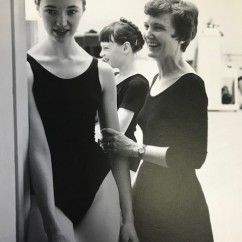 After leaving the Giordano Studio, the two began looking for studio space where they could continue to teach together. In their search for a rental space, an Evanston realtor suggested they look at a building that had been a dance studio and was for sale on Central Street, but the two had no capital to purchase property. “Find someone to buy the building,” the realtor told them. “And rent it with an option to buy.”

Hubata had been doing secretarial work for Myron Holmgren, who owned several properties which he rented out in Evanston. He thought the two were a good risk and wanted to buy the building and charge them rent with an option to buy. When Hubata’s father heard about this he said, "I’m not going to let Holmgren buy the building. I’ll buy it,” which he did, at first refusing to charge interest but Hubata and Miss Wills insisted. Hubata’s father set up a schedule of payments for their purchase of the property. It took them 13 and a half years to buy the building, paying Hubata’s father bi-annual installments on his birthday and Father’s Day.

They had only one week between the purchase of the building until the school opened in February, 1968, to refurbish the space and refinish the beautiful sprung wood floor. Students ranged from pre-ballet to professional dancers, including Kay Johnson, Sheri Senese, Juanita Lopez and Marla Balaban, who, along with Hubata, became the inaugural dancers of The Evanston Concert Ballet, incorporated as a not-for-profit regional ballet company under Miss Wills’ direction in 1973.

Miss Wills formally retired from teaching in 1986, and Hubata took over as the sole director/owner of the school, but the two colleagues never failed to talk on the phone every night.

Miss Wills and Paul moved to Madison, Wisconsin, then to Atlanta, Georgia, and finally to Florida in 2012 to be closer to their daughter and her husband. They lived out their final years at Atria Park of Lake Forest in Sanford, Florida.

Kerry Hubata was a mere nine years old when she appeared in Miss Will’s ballet class all eyes, long legs and misaligned spine at the South Side branch of the Gladys Hight School of Dance where Miss Wills taught ballet and tap.

“Miss Wills put me between two girls who knew what they were doing and spent the whole hour lifting my chin so I wouldn’t look down at the floor!” said Hubata. “I loved her from the start.”

And so began a lifelong relationship that evolved from teacher/student to mentor/protégée, to teaching colleagues, business partners and the dearest of friends.

“Miss Wills’ classes were a challenge, but she always encouraged us, not only correcting us, but also telling us when we had improved,” Hubata said in a recent interview with See Chicago Dance.

One of the most important things Kerry learned from her mentor, as both a dancer and teacher, was understanding the physicality of correct alignment.

“She told you the truth,” Hubata said, “but she explained the reason for her corrections and the purpose behind the technique.” She was the embodiment of “the good, the true, the beautiful,” Hubata said, both as a teacher and as a person. There was no pretense to Miss Wills, whose teaching was always positive. “No result through insult,” she often said, emphasizing quality and integrity from the very first plié at the barre through reverence at the end of class. “Patience in effort,” was one of her favorite mottos, along with “Length is strength!”

I had the opportunity to study with Miss Wills for several years toward the end of her career, after my husband and I moved to the North Shore with our one-year-old son. I had been going to morning class with Larry Long and Orin Kayan at The Ruth Page Foundation downtown and wanted to find a good class closer to home. Classes with Miss Wills and Kerry were always a delight. What I remember most were their emphasis on musicality with live piano accompaniment and infusing every exercise with expressiveness and artistry, from pliés to center floor adagio and grand allegro. It didn’t matter how high your extension was but rather that you executed it with integrity; you did it “right.” For me, the Evanston School of Ballet felt like a sanctuary of peace, love, dedication and inspiration.

I had the privilege of working with Miss Wills when I was invited to choreograph “Where the Wild Things Are” for the Evanston Concert Ballet Apprentice Group, under Miss Wills’ direction. Throughout the process, she was a generous collaborator and artistic mentor. One of the advanced students who was a “Wild Thing” in the production was high school senior Melissa Thodos, who went on to study dance at Syracuse University, then performed with the Chicago Repertory Dance Ensemble and later established her own highly successful contemporary dance company, Thodos Dance Chicago.

Thodos began studying at the Evanston School of Ballet at the age of six and continued there through high school. “It was formative for me as an artist,” she said. “Life was lived there.” There was a healthy work ethic, she said, in which Miss Wills gave an “an absolute level of attention to your work.”

“She created an almost conservatory atmosphere,” Thodos said. She describes Miss Wills as “visionary, direct and honest.” She was “in the moment” and took everything in. “Her gaze had a lot of breadth,” Thodos said. ‘She was able to see the bigger landscape that I was a part of,” which made Miss Wills’ students feel they were a part of something bigger than themselves.

For Carol Kyros Walker, Phyllis Wills was “part of my life, as a teacher and friend.” When Walker was in her late teens, Miss Wills took her on a tour of Europe, studying under teachers at the Paris Opera Ballet and in England with Ninette de Valois, director of the Sadler’s Wells Ballet (which became The Royal Ballet) as well as with Margot Fonteyn and Michael Somes.

“Miss Wills had an eye for detail, correctness and technique,” Walker said in a recent phone conversation. She credits her teacher with having a profound influence on her own career teaching dance at the School of the Art Institute of Chicago for 30 years. ”She was witty,” Walker recalled. Never one to mince words, “she suffered no fools!” Miss Wills didn’t like frills, Walker said. “She was down to earth, modest and had tremendous humility.”

Toby Nicholson, retired head of the New Trier High School dance program and dancer with Sybil Shearer’s company said, “It wasn’t just a girls’ class.” Because some of the girls Toby was choreographing for were performing “en pointe,” he decided to try it himself and took a few point classes with Miss Wills. He described it as “very challenging and fun to do!”

Phyllis Wills Wagener passed away on March 29, 2021 at the age of 98. A memorial mass honoring her land her husband’s lives was celebrated on July 31 at St. Athanasius Parish in Evanston, where they were once parishioners.