On Jan 21, a group gathered at the Hyde Park Art Center to celebrate the life of Martin Luther King Jr. Only at this event, attendees were asked not only to listen and reflect on Dr. King’s impact, but to also create something of their own. They made collages out of random black items until the space was transformed into a black universe—a tapestry of darkness that spread beauty and brought a community together.

The workshop was one of the first events part of this year’s Eclipsing Festival. In its second year, the 2019 Eclipsing Festival provides a space for artists of color and trans and queer artists to confront their lived experiences. In addition to workshops and public programming running Jan 31-Feb 3, LGBTQIA+ artists and artists of color challenge traditional interpretations of darkness and reimagine this word for themselves in a series of live performances at Links Hall.

Festival founder and curator Amina Ross started the festival last year as a way to build on themes from their own solo work. (Ross uses they/them pronouns.) Ross recognizes the weight of the words “dark” and “black” in the English language as holding a primarily negative meaning, such as sin, fear and bad behavior.

The programming and performances of Eclipsing Festival aim to explore the multifaceted meanings of these terms and their effect on how dark bodies and trans and queer bodies are valued.

“There’s a tremendous fear of blackness embedded in our spiritual language, in our visual culture, in the way that art is taught. From the church to the museum or from the church to the art studio, there is an anti-dark skew where black signifies negativity and something to veer away from,” Ross said. “[Eclipsing Festival is] about troubling that assumption and bringing light to that assumption and beginning to play with it and see the dimensionality of it.”

Upcoming live performances at Links Hall feature artists who approach the festival’s themes through a range of disciplines.

Chicago dancemaker J’Sun Howard addresses masculinity and queerness through movement in an homage to painter Charles White. Porsha Olayiwola presents a “choreopoem” that uses poetry, song and movement to look at her experiences as a “queer, fat and dark-skinned woman,” according to her website.

Yun Ingrid Lee and Jesús Hilario Reyes rely heavily on technology in addition to movement in their respective works, while Ariel Zetina uses sound and sound waves as the primary means of communicating with audiences in her performance.

The use of dance, performance art, spoken word and multimedia production elements in the performances allows participants to engage with abstract notions of darkness and find concrete embodiment of Eclipsing Festival’s themes.

Justin Mitchell, the DJ Hijo Prodigo and an attendee of last year’s festival, said that the multidisciplinary nature of the festival performances allows audience members to digest these complex themes in a way that wouldn’t be possible in another space.

“It creates this urgency for the present that is not present in a lot of the art spaces that I frequent,” said Mitchell.

Mitchell is the curator for Eclipsing Festival’s after-party on Feb. 1 at Elastic Arts, as well as a collaborating sound designer for Reyes’ performance. 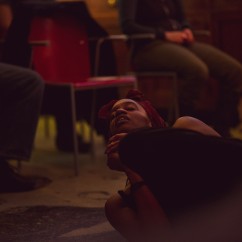 Healer and performer Sojourner Zenobia led the opening reception with other artists and a workshop with Amina Ross during the first week of this year’s festival. Photo by TTATU For Ross, the urgency Mitchell refers to stems both from the interdisciplinary nature of the festival and the wide variety of programming.  Ross views festival attendees as participants and asks them to go beyond the “passive reception” of information to understand different perspectives of darkness.

Festival participants experience multiple types of learning through a mix of multimedia, movement and text to engage multiple senses and actively view the works in the present.

Hosting workshops and events in addition to the performances provides another opportunity for participants to actively contribute to the art.  Participants are asked to contemplate the festival’s themes in discussions, and are invited to make collages and other creations in some hands-on events.

“Participation allows viewers to have agency, and because I am engaging themes of power in the festival, what better way to do that than through embodying it and allowing people to contribute to the events that are happening?” said Ross.

Even Mitchell’s after-party aims to transform how guests understand darkness while they actively participate in an experience. A continuation of a summer series titled Perfect Dark, the after-party uses the culture of nightlife and club spaces to shed light on to how night and darkness are positive spaces.

Mitchell points to night as a cover for the LGBTQIA+ community, allowing people to come together in night club spaces where they are free from prejudices or societal restrictions that exist more often in the daytime.

“The night allows for a degree of freedom that the day doesn’t necessarily represent or has been shuttered, so for queer people, the night has become a place of liberation and freedom,” Mitchell said. “There are a lot of toxic elements to the night that are imposed but not explicit, so I think one of the aims of what the festival functions as—as well as this party space after—are to really present new ways of being in this environment.”

The commonality between all the work of the Eclipsing Festival, according to both Ross and Mitchell, is how the artists “embody alternate worlds” and re-envision the meanings of darkness while also acknowledging both sides of the festival’s themes.