The Pritzker Pavillion in Millennium Park, downtown Chicago’s stunning public lakefront showplace, is much more than a terrific outdoor concert venue for free summer performances of all kinds. It’s a magnet that draws thousands of people together from all corners of Chicago and the world, which is exactly what happened last Thursday night when “Stomping Grounds” wrapped up its two-month-long tour of neighborhood venues with a Grand Finale that celebrated both the universality and cultural specificity of percussive dance and rhythmic arts. It also served as the kick-off for the year-long celebration of The Chicago Human Rhythm Project’s 30th anniversary.

Each spring for the past four years, “Stomping Grounds,” produced by CHRP and The City of Chicago Department of Cultural Affairs, has been presenting free public performances of percussive dance by Chicago’s top companies specializing in culturally specific dance forms from around the globe. 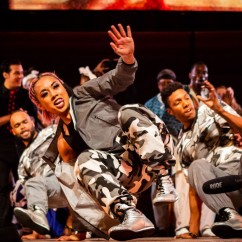 At each of the subsequent free neighborhood performances, some of whose venues are culturally-specific, three or four performing companies from diverse cultural traditions joined forces, bringing together and exposing equally diverse neighborhood audiences to a cross-pollination of dance styles and cultures.  For instance, Trinity Irish Dance Company hosted the April 21st performance that also included Muntu Dance Theater of Chicago (African), and Ensemble Español (Spanish)  at The Irish American Heritage Center.  Other venues were DuSable Museum of African American History, The Beverly Arts Center, The National Museum of Mexican Art, and The Garfield Park Conservatory.

The mission of the Chicago Humn Rhythm Project, founded and directed by dance visionary Lane Alexander, is “to present performances, education, and community development that fosters artistic excellence and social reconciliation through authentic percussive dance and rhythmic expression. Alexander, who is also founding director of CHRP’s Stone Soup Rhythms, formerly known as BAM!, created Stomping Grounds to help bring audiences and artists of diverse cultural traditions together to foster peace and mutual understanding.” 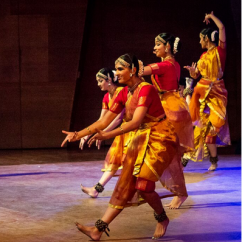 It was a perfect, clear Chicago night.  By the time the MainStage event began with a video preview of Stomping Grounds projected on a giant screen above the stage, the Pavilion and lawn were teeming with eager concert goers of all ages, from babies to seniors, families, couples, and singles, representing a true melting pot of Chicago neighborhoods, and proving the Pritzker Pavilion the perfect place to bring Lane Alexander’s dream to life. A palpable spirit of joy and solidarity radiated among audience members and across the footlights between audience and performers.

Following the video, the musicians and dancers of Ensemble Español ignited the stage with cape-twirling, heel-clicking fire, to the haunting strains of Flamenco vocals, cahon drumming,  and guitar. What better way to launch an evening about rhythm than with the dazzling spectacle of Spanish passion in a black, white, and red costume motif complimenting the complex syncopated rhythms of Flamenco hands and feet. 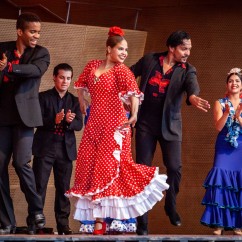 A brief interlude brought Alexander on stage to introduce Chicago Cultural Commissioner Mark Kelly and the Consul Generals of Spain, Mexico, and Ireland, the latter stunning the crowd with an expert impromptu demonstration of Irish dancing. 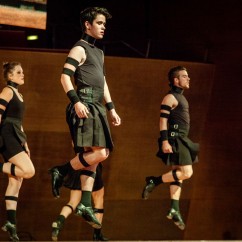 No further introduction was needed for Trinity Irish Dance Company, whose youthful high steppers never fail to astound. Their upright spines and immobile arms contrasted with the earthy arching, pelvic action, air-sculpting arms and fanning fingers of Ensemble Español’s Flamenco forms. Trinity’s agile knees and aerial ascensions kicked and bounded as if on springs. You couldn’t help but marvel at the similarity with their Spanish counterparts, however, in the constellation of sonic composition they both created with their feet! While the rhythms are distinctly different, the mechanics cross over. 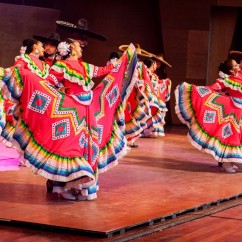 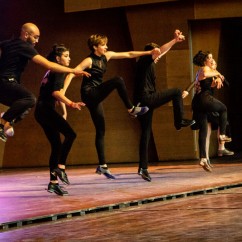 The sheer intensity of energy on stage built to a fever pitch with Muntu Dance Theater of Chicago’s full force drum unit and grass-skirted exorcists. The grand finale brought all seven companies on stage together in a breathless improv face-off of styles and cultures, all to the rhythmic thunder of Muntu’s infectious drumming. The benign contagion of rhythm seemed to light up the night sky as patrons filled the aisles to jam with the jammers. 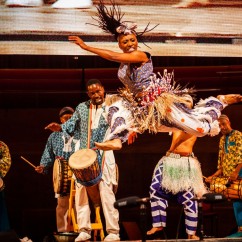 Pritzker Pavillion and the marvelous Millennium Park in which it is situated have a beating heart  that draws the city’s diverse population to the universality of music and dance. The place itself is in turn fueled and animated by the people who flock there for events like Stomping Grounds. You might even dare to believe, at least for one glorious outdoor night, that dance really can bring peace to the world, or at least to Chicago. 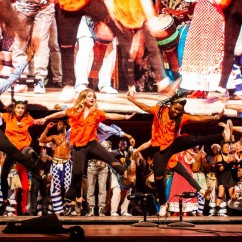