Elizabethan bawdiness and Shakespearian metaphor combine in John Neumeier’s vision of “Othello” (1985), performed by the Hamburg Ballet this past Tuesday and Wednesday at Harris Theater. A sense of play and free-wheeling theatricality poignantly underscored the magnitude of Othello’s tragedy in Neumeier’s skillful blending of both period and contemporary elements in music, costuming, set design, and movement. His rich tapestry of historic and modern forms resonated with timeless themes of racism, misogyny, jealousy, and revenge that made them as relevant for today as they were in Shakespeare’s day.

The mood was set even before the first rowdy acrobats burst through the audience and onto the Harris stage with their raucous prologue of kicks and tumbles to chanted syllables, “eh-dum-dee-day” of a male chorus and percussion. Both music and movement were edgy enough to foreshadow the collision of opposing energies about to overwhelm this world.

There could have been no clearer signal to the audience that this retelling of Shakespeare’s tale would be anything but conventional story ballet, especially as it played with the conventions of Shakespearian theatre. For instance, highly-stylized segments utilized the chorus as “players” to stage the play-within-the-play, revealing through farcical exaggeration the unspoken hostilities, prejudices, and rivalries at work in the Venetian court. Almost circus-like in the mockery and masks of their all-out presentational performance, these segments effectively propelled the travesty of events with choreographic irony that worked its way into Othello’s psychological and physical state.

Another highly effective convention, borrowed from contemporary theatre, is Neumeier’s use of the doppleganger, or alter-ego, to represent stereotypes in the mind-set of 16th-century Europe.  Embodied in the characters of The Wild Warrior (Macello Libao in blackface) and La Primavera (Florencia Chinellato, Xue Lin, and Priscilla Tselikova), they represented the one-dimensional colonial world’s casting of Othello as the African savage and Desdemona as Botticelli’s European vision of virginal purity, playing upon the dichotomy of good and evil at the heart of the story.

Visual spectacle played a major role in the storytelling, with Neumeier’s own costuming and set design.  The set, consisting of a two-story, draped tent that served multiple functions, and giant hanging tapestries framing an exposed backstage and spilling out into the audience, evoked the spirit of vagabond theatre and its origins in the Italian Commedia del’Arte at play in Shakespeare’s texts and staging at the historic Globe Theater. That spirit was further reinforced by the dancers’ choreographed manipulation of ropes and pulleys to alter the set for scenic changes.

Costuming capitalized on the play’s metaphors with the use of black and white, with Othello (a brooding Amilcar Moret Gonzalez) in black and Desdemona (the heartrendingly innocent Hélène Bouchet), Cassio, (a bouyant Alexandr Trusch) and the Venetian aristocracy in white. Iago (Ivan Urban, villainous to the core) and soldiers wore layers of modern military fatigues and leg warmers in various hues that suggested combat boots and medieval battle attire.

Neumeier’s “Othello” is told largely through movement metaphors suggestive of Shakespeare’s text, rather than through literal representation.  In Neumeier’s dance drama, each role unfolds with distinctive movement characteristics and a unique choreographic voice.

Desdemona’s expansiveness in loose-limbed extensions and port de bras, lighter-than-air petit allegro, and the freedom and pliability of her spine gave her innocence and youth an openhearted willingness that was all the more tragic when her love is incomprehensibly spurned.

Iago’s parade of self-justification becomes the prelude for his soliloquy, a haunting psychological journey in total silence, paralleling Othello’s silent monologue. Iago’s body gives birth to his dastardly plot. You see the idea as it is born in the boiling rage of his body’s core and its evolution into his arms and its further refinement in the discovery of hands that become cuckold’s horns, then play out in his imagination as the puppet-like limbs of his victims at the mercy of his manipulations. Nowhere does Neumeier resort to pantomime to convey the substance of his character’s intentions, but rather, relies on the energy and abstract design of impulsive gesture to convey strong emotion. The full force of Iago’s physical soliloquy overflows into vocalized laughter at the pinnacle of his machinations, signaling a major plot transition that achieves shocking finality in the resumption of Naná Vasconcelos' musical accompaniment.

Iago accelerates his plot in a brutally abusive sex scene with Emilia, his wife, in which she becomes the unwitting agent of his scheme to destroy Othello. Iago, counting out loud in gibberish, then in Russian, then in Spanish, corals her in a robot-like march of acquiescence, she replicating his oral counting. Act I rushes to a climactic close as the chorus transforms the tented scaffolding into a ship, preparing for Othello to set sail with Desdemona and his retinue to Cypress to suppress a supposed Turkish uprising.

Act II opens with Othello, now wearing a white shirt, signifying perhaps his vulnerability to Desdemona’s love. He first engages in a comradely tutorial of follow-the-leader with Cassio, then in a playful duet with Desdemona, who now, as a sexually initiated married woman, is dressed in pink. She is still girl-like and giddy in her coyness as Othello spins her tenderly. 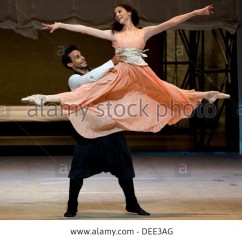 Othello and Desdemona, Act II  The contrast to Iago’s marital duet does not go unnoticed. Iago becomes the choreographer of his plot as he orchestrates a quintet calculated to pair Cassio and Desdemona, seemingly in an assignation, as proof of her duplicity. Iago’s movement first mirrors Othello’s, drawing him into his sway of influence, then flips into subtle manipulation, gradually poisoning Othello’s mind with jealousy. Iago’s mind games with Othello play out in physical confusion. Othello pumps his breath, his limbs become dissociated from his body, and he launches a double tour that lands on the floor and jack-knifes into a hand-stand. Here Neumeier gives us Othello’s body completely severed from his mind, his imagined vision of betrayal wildly portrayed by the chorus in nightmarish contortions of male-female partnering and rape.

The story moves furiously toward its inevitable tragic denouement. By this point, on the brink of his fatal confrontation with Desdemona, Othello has made his decision, and we know what’s going to happen, but Neumeier forces him to linger with Desdemona in a drawn-out passage of minimal movement, set to Arvo Pärt’s overly-dramatic “Tabula rasa.” Lamentably, there is no further dramatic arc of transformation. With that much music to fill, Othello should still be wrestling with his conscience, his love, his ego, and his jealousy, and we in the audience should be practically yelling, “Don’t do it!”  Instead, we are saying, “kill her already!” It isn’t until Neumeier redeems the storytelling with a breathtaking moment--Othello lifts Desdemona’s rigid body vertically in front of him, and she arches her torso in an astounding ninety-degree angle over his head--that the tragedy resumes, and, in breathtaking silence, we witness Desdemona’s murder and the collapse of Othello’s world.

John Neumeier is unquestionably a key innovator and purveyor of contemporary dance theater. His creativity and wellspring of movement ideas, his uniquely holistic artistic vision, his acute sensitivity in the use of music, and his fearless enthusiasm for theatricality, including the use of dancers’ voices, make any material he tackles worthy of close attention. “Othello” was choreographed early in Neumeier’s career. The innovation and achievement of this ballet, despite a singular flaw in story movement at the end of Act II, still stands as a viable argument in favor of the proliferation of story ballet in contemporary choreography.