Due to the COVID-19 pandemic, 2020 has truly been the year of the online dance film. Recognizing and utilizing this current performance zeitgeist as fuel, Wicker Park-based Collaboraction Theatre Company presents three short dance films during this year's online edition of their fifth annual Peacebook festival. Opening October 17 and running through November 8, Peacebook 2020 will feature a total of 10 world premiere videos split into two distinct programs.

Among the Millennial cohort, there are several similarities. To name a few, this is the Collaboraction debut for all; each of their works centers the reconciliation of personal histories and narratives; each of them report how easy and impactful Collaboraction made their Peacebook experience. Now, for their nuanced differences...

"Back to Me" By Darling Squire

2019 Chicago Dancemakers Forum (CDF) Lab Artist Award recipient Squire offers an excerpt from her current evening length work-in-progress. "Back to Me" pays homage to the music of Squire's youth, which grounds her contemporary choreographic language. Filmed outdoors throughout city parks (daytime and nighttime), and set to a driving drum-n-bass remix of "Just One of Those Things," Squire's joyous movement codas and flowing costume evoke her effervescent nostalgia for her early years of dance; a lingering feeling she describes as "flying above the clouds and frolicking with the birds and bees like the winds whirling through the trees" (drone shots literally heighten this experience). Squire attests to how beneficially the COVID-19 quarantine has impacted her practice, giving her time and space to reconnect with nature, specifically birds (or "aviary beings"). Modeling aviary beings, Squire is forging her evolving artistic path by "letting the current of the universe" carry her. 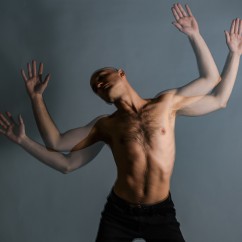 Luzzo (pictured) explores the topic of peace through an examination of his Irish Catholic family growing up on the South Side. "I Used To Write With My Left Hand" By Luzzo in collaboration with Lauren Fabrota

Queer actor/dancer/movement director Luzzo's new dance theater work is a beautifully executed slice-of-life family narrative. "I Used To Write With My Left Hand" explores the effects of intergenerational trauma catalyzed by homophobia within the confines of his Irish Catholic family from Chicago’s South Side. Through his vulnerable and interdisciplinary lens, Luzzo endearingly charts and grapples with his memories of older queer relatives ("Uncle" and "Cousin"). As Luzzo explains, the 'vision of peace' within his new work is his own "search for peace within." Filmed between Collaboraction's stage and the outdoor garden of the Lincoln Park Conservatory (captured in a sumptuous drone shot), Luzzo shared that his Peacebook 2020 experience "made me feel so elevated." In "I Used To Write With My Left Hand," Luzzo illuminates the potential catharsis and healing to be accessed when we 'go home' again—quite a takeaway, in this socially-distanced era.

In "Brother! Blackbird", Winifred Haun company member Gooden combines dance and storytelling (including spoken word by longtime collaborator Ashley Wilkerson) to explore liberation vis-a-vis themes of identity (e.g. sexuality, race, culture, faith). Gooden shares that he enjoyed "complete creative control and direction" during his four-hour Peacebook video shoot. Filmed on the Collaboraction stage, in the alley behind the theater and at the bustling corner of Damen and Milwaukee Avenues, Gooden's pristine choreography travels surprisingly well between the disparate locations. Gooden explains that each location represents a distinct phase of the work's three-act narrative. The onstage opening section introduces Gooden as the proverbial caged bird—a Black man and artist limited by ascribed boundaries and expectations. In the second section, in the alley, the semi-caged bird begins to broaden his wingspan. While in the third and final section, the semi-caged bird is free to fly on his own unapologetic terms. Though this is the only video of the three that does not use a drone shot, the man-on-the-street feel of "Brother! Blackbird" is by no means any less compelling (particularly the closing shot).

The fifth annual Peacebook premieres for free via Zoom on Oct. 17. Livestream simulcasts are available on Collaboraction’s Facebook and YouTube pages. Visit collaboraction.org to register for the Zoom link, or visit Collaboration's event page below for more information.