There are two performances of "Giselle" happening in Chicago this month: Akram Khan’s “Giselle” performed by the English National Ballet Feb. 28-March 2, and Vertical Sideshow’s “Giselle" this weekend. One is being presented at the Harris Theater–a world-class performance venue that presents Chicago with masterful performances by artists of international and national reputation, and the other is being presented at Links Hall–a local performance space that, for over 40 years, has welcomed artists who push the boundaries of creativity, artmaking and the impact art has on our world and culture. In reimagining this tale from the romantic period, Vertical Sideshow busts it wide open. Co-directed by Chris McCray (AKA Ray Gun) and Ken Gausch (AKA Buzuka Joe), Vertical Sideshow’s “Giselle” is a thrilling reimagining of the old classic tale that uses humor, burlesque, circus arts and drag to bring to the forefront conversations of agency, gaze, pleasure and power.

Narrated by the witty and lively Alexis Bevels, Vertical Sideshow’s “Giselle” opens with a montage of old 1920s-era black-and-white film, switching between clips of old movie stars, ordinary people scurrying about an industrial cityscape, witches, black churchgoers shouting, magic, funerals and regular business men in suits and top hats. This continually contrasting montage of the weird and fantastic with heteronormative culture, sets the tone for the entire evening that leads me to believe there is more to "Giselle" than meets the pointe shoe. Vertical Sideshow creates an alternative world where tutus and tights are replaced with feathers and corsets, and Death (beautifully played by Noah Grey) is envisioned as a figure with a platinum-blonde pixie cut, who gracefully glides around in a long, see-through, white tulle garment and seven-inch sparkly stilettos. Ballet vocabulary is used alongside vogue, pole dancing, aerial and acrobatics creating captivating, yet sometimes lengthy, dance numbers. 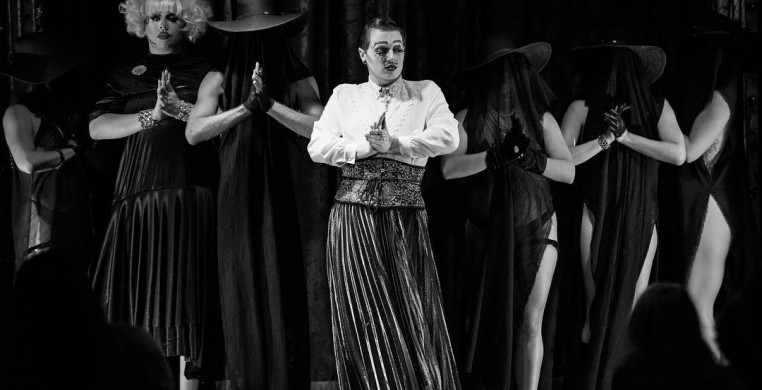 Vertical Slideshow's "Giselle," photo by Greg Bell And even the storyline shifts when Giselle–who in the original ballet graciously chooses to forgive and spare the life of her deceitful lover, Albrecht–joins the Wilis to destroy and rip him to shreds. Vertical Sideshow screws with “Giselle,” highlighting the ways in which the tale’s already dark storyline is lined with queer possibilities. At one point, Albrecht (played by Bazuka Joe), seemingly representing all that is patriarchy in his bland, white button-down and black pants ensemble, enjoys a series of strip teases. He lounges in a chair, back facing the audience, and watches as a woman dressed in a skin-tight, spaghetti-strap, cheetah print dress lights a cigarette. She is lit by the scenes from an animated show with cityscapes, bars and pimps projected onto the wall, and after a moment of teasing, motions for Albrecht to approach her. She gives him permission to slowly unzip her dress, as she stands swirling her hips on top of her throne. Albrecht returns to his seat, titillated, as the woman’s servants remove her gloves and shoes. The audience cheers and whistles, in what both reminds me of catcalling and encouragement.

Although Albrecht is enjoying the view, it is clear that he is occupying her space, that he is under her spell, as a guest in her world. It is also clear that Albrecht never escapes the world even when he thinks he has won, conquered and satisfied his desire. The Wilis haunt him once again to his death, walking high on the balls of their feet and waving their hands above their heads, in what is some of the best choreography in the show.

“Giselle” opens up the conversation about women’s agency, particularly in our beloved ballets. And, in our current conversations surrounding the body including topics of sexual consent, reproductive rights, gender identity and sexuality, and state-sponsored violence on black and brown bodies, Vertical Sideshow takes Giselle from her glass case, and puts her in line with the rest of us who have had enough.

"Power doesn’t have to show off. Power is confident, self-assuring, self-starting, self-stopping, self-warming, and self-justifying. When you have it, you know it.” - Ralph Ellison