Five years ago, Visceral Dance Chicago’s explosive entry onto the Chicago dance scene took the town by storm, with exquisite dancing, sophisticated choreography, and production values that take most fledgling companies years to attain. The big question: could they sustain it?

Visceral does not disappoint in its fifth season opener this past Saturday at Skokie’s North Shore Center for the Performing Arts, (the program repeats at 7:30 PM, Saturday, October 7th at Chicago’s  Harris Theater). Visceral’s seemingly tireless artistic director Nick Pupillo continues to take his young company on a succession of fearless adventures, fantastic frolics, and demanding escapades. The five pieces on the program are testimony to the company’s versatility and skill across a diverse range of musical, stylistic and thematic choices, with varying degrees of risk-management.

Taking on Mark Godden’s “Minor Threat” (1996)  would be a high risk venture for any company, but Visceral is more than up to the task with the acquisition of this quite wonderful piece into its repertory this year. Not only does it rely on high stakes balletic virtuosity and a command of modern forms, but it demands hair-trigger musicality, rigorous rehearsal direction, and lush artistic expressiveness. A perfect program opener, “Minor Threat” showcases Visceral Dance Chicago’s ten beautiful dancers at their sparkling best in a piece that devours Mozart’s Piano Concerto No. 20 in D Minor in a way that would surely tickle the composer. Godden’s marvelous combination of whimsy, lyricism, nobility, and outright adoration of the music calls to mind what Balanchine did with Bach in “Concerto Barocco,” not just mirroring the music, but climbing inside its interior architecture and extracting its essence in gloriously liberating solos, duets, and ensemble counterpoint. Godden’s choreographic visualization of the music plumbs the riches and nuances of Mozart’s rhythm, orchestration, melody, and harmony and comes up with a specific movement world that is at once conventionally balletic and delightfully not, unleashing the freedom and expressive impulses of sheer joy. 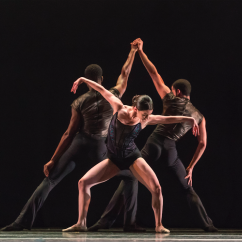 The world premiere of Princess Grace Foundation recipient Danielle Agami’s “Pick a Chair” certainly qualifies as fearless, teetering even on the edge of reckless abandon. A prim Noelle Kayser’s deadpan spoken monologue, in a prelude to a cello recital she is about to perform, begins with a kind of dark humor. Company dancers pantomime ironic dramatization of her story while she remains poised, cello in hand, ready to commence playing, but repeatedly distracted by her verbalized thoughts. Her story of sudden, life-transforming infatuation and lust deconstructs into raucous sexual pursuit of a totally disinterested Braedan Barnes. General mayhem ensues around them, sweeping Kayser’s character into the fray of ensemble movement.

At times funny, quirky, avant garde or playful, the piece ultimately dissolves into a hodge-podge of multi-colored plastic balls, electronic chicken clucking, sirens, tribal drums and calculated weirdness. The ensemble, in a succession of frantic skips, neurotic, other-worldly twitches and slightly tortured body gestures, surrounds the two. Kayser disappears and re-enters, sans concert dress and high heels, in a toy battery-powered car, living out a non-affair with the unresponsive boyfriend that culminates just shy of murder by cello bow.

Kayser’s multiple talents as superb dancer, convincing actress, comedienne, and legit singer engage immediately, but Agami hasn’t gone the distance yet. Her bold use of spoken self-narration draws the audience into Kayser’s character’s quirky story, and we become willing participants only to have the story tossed into the air like the dozens of plastic balls that overwhelm the narrator and the stage.  The piece seems to lose its way mid-point, wandering between a real story that gets its legs cut off, and a psuedo-story, set up in service of a larger choreographic statement that never quite evolves. 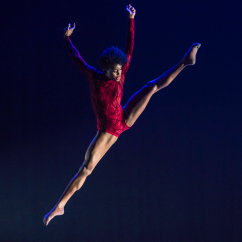 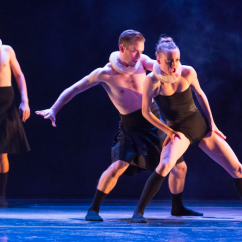 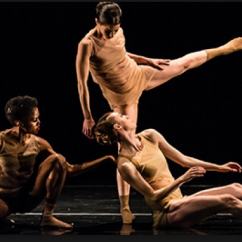