“Pivot and find the blessing.” Sage words of advice from Jacqueline Sinclair, artistic director of Joel Hall Dancers & Center (JHDC) in the time of coronavirus. The mission of “awakening the dancer in everyone’s soul” is still intact at JHDC, but in recent years they took a smart turn toward sustainability. That’s all Sinclair. She led the charge breaking down the old business model, enlisting artists to do the administrative work and began working on a legacy project and performance—as well as hunting for a new space to house JHDC. All of these were in the works when March came, and the pandemic changed everything. 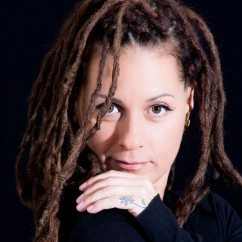 Jacqueline Sinclair With students ranging from pre-schoolers to senior citizens, safety was of the utmost concern. “Joel is going to be 72,” Sinclair said in a phone interview. “We used him as the gauge. If I wasn’t comfortable calling him into the studio, then we would close. We held in there as long as we could.” The decision to close the studios came before the government mandate. Luckily, their two studio managers are tech savvy, so a portion of classes were up and available online quickly. Although they took a financial hit, especially when the weather got warmer, there was a blessing there too. Students across the 47-year JHDC history can now take classes online from anywhere in the world.

The legacy performance was cancelled and the JHDC company dancers are on hiatus until further notice so Sinclair can focus solely on “the move.” Earlier this month in a Facebook townhall, JHDC announced plans for The Hall, a new home in Albany Park to be built out into three studios and a performance space. Instead of studios, the four spaces are named as Houses, a nod to the Ball Houses in New York City’s underground vogue and drag cultures. JHDC will have a House of Inclusivity, House of Diversity, House of Encouragement and House of Free Expression. “We’re really looking at how the House of Free Expression can be used as an arts incubation center to help heal the arts community.”

JHDC has closed on the building and is solidifying floorplans with hopes of opening in a partial capacity in late fall. For now, it’s full-time fundraising. “It’s been a challenge, but we keep seeing tiny cracks of light and move towards them,” Sinclair said. “We’re looking at opening the building in phases. We have several different entrance ways, so we can close some and shift some of the buildout into fully functioning studios.” Aside from the fundraising efforts, JHDC is sustained through foundation support from many organizations including Chicago Black Dance Legacy Project, Field Foundation, University of Chicago, Creative Partners/Lucky Plush, ArtsWork Fund and the International Association of Blacks in Dance. “There have been some sleepless nights,” she said.

Sinclair has been part of the Chicago dance community and specifically the JHDC family for 30 years, moving through a gradual progression of student, apprentice, principal dancer, rehearsal director and assistant artistic director into her current place of leadership. She grew up in the Northwest suburbs but sought out classes in the city with Joel Hall at age 15. “It was truly jazz that sparked my soul,” she said. Soul-nurturing is where Sinclair thrives and she is focused on making sure the students, company dancers and founder are artistically happy, as well as the community at large. Building that community drives her, perhaps more so in these precarious times. “We need to collaborate. This is not a time for competition and separation. Chicago is segregated and the dance community is very siloed. This truly is a time to come together.”

Over the month of August, editor-at-large Vicki Crain profiles four dance institutions to find out where they are in the reopening process and how they are coping with the new guidelines to make sure they are still bringing dance performance and education to the Chicago area.

Want to read the whole series? Check out Vicki's features on the Chicago Academy for the Arts, Hyde Park School of Dance and Natya Dance Theatre.