We’ve been buzzing about Christopher Wheeldon’s brand new re-imagining of the classic holiday favorite for over a year, and now that it’s finally here, Nutcracker jaws are clacking with joy across Chicagoland. Finally, a Nutcracker Chicago can claim as its own.

Commissioned by the Joffrey Ballet and premiering December 10th-30th at the Auditorium Theatre, Wheeldon’s Nutcracker spins a magical tale that both honors traditions and breaks the mold. Author Brian Selznick’s (“The Invention of Hugo Cabret”) story adaptation makes a convincing argument for transposing ETA Hoffman’s original European setting to Chicago’s historic 1893 Columbian Exposition with striking results, especially in ACT I, where the story and setting are most significantly altered.

To get us there, a dream team of design wizards has pulled out all the stops to transport our imaginations to Christmas, 1892, in Jackson Park on Chicago’s south side where the world’s most ambitious World’s Fair is under construction.

The thrill of Tchaikovsky’s famous trumpet fanfare is a perfect herald for the city’s excitement over the Fair’s impending opening, while a visual overture of historic news headlines, photos, and the Fair’s ground plan and Neoclassical pavilions unfolds in projections on successive layers of scrim, bleeding over the proscenium arch and into the the auditorium. 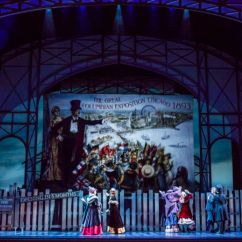 The effect is an instantaneous transformation of time, place, and circumstance, effectively alerting the audience to a fresh new take on the relationship between music and story. Wheeldon’s imagination hears new dramatic possibilities in the musical score, illuminating Tchaikovsky’s familiar tunes with a new ear to the music’s theatrical riches. His choreographic inventiveness, combined with a healthy respect for truthful storytelling, makes for the perfect blend of tradition with innovation, giving the audience permission to suspend disbelief from one delightful surprise to the next.

The basic story premise parallels the original in key structural plot-points without being a slave to them, while at the same time, it successfully raises the theatrical stakes and delivers a meaningful message, something missing in the mere spectacle of the original. Wheeldon gives us both spectacle and dramatic journey.

We are in theater mode from the get-go, with a clear class divide of Chicago’s rich and poor at holiday time. Tchaikovsky’s traditional living room party scene music illuminates instead an urban environment where rich and poor intersect, street urchins steal what they can from unsuspecting shoppers, and rats lurk behind every corner (Basil Twist’s whimsically diabolical puppets). The resident Rat-Catcher (a wry Rory Hohenstein, with his own pet rodent perched on his hat) contrasts with The Great Impresario of the Fair (Miguel Angel Blanco), a magical and mysterious counterpart to Hoffman’s original Drosselmeyer. 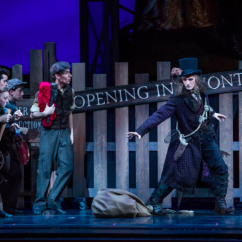 Instead of the over-the-top opulence of the Stahlbaum family Christmas party, we follow a teen-age Marie (Amanda Assucena), and her impish little brother, Fritz (Dylan Sengpiel), from the streets surrounding the fairgrounds to their humble shack on the construction site where they live with their widowed Mother (Victoria Jaiani), an immigrant sculptress hired to design the golden statue of the Republic. Assucena gives wide-eyed radiance to her portrayal of Marie, little girl enough to be captivated by the Nutcracker doll, but old enough to fall for The Impresario’s dashing apprentice, Peter (Alberto Velasquez). 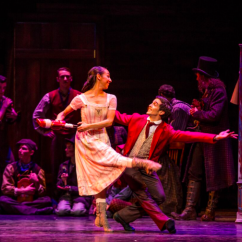 Amanda Assucena and Alberto Velazquez  Casting company dancers rather than juveniles in these roles gives Wheeldon plenty of opportunity to infuse Act I with the characters’ growing attraction for each other as well as their oh-so-lovely dancing. Young Dylan Sengpiel has no trouble anchoring the stage with humor, mischief and impressive technical prowess. Jaiani’s Mother brings a wistful determination and emotional depth to a role that could have been generic but instead resonates with human longing and hope, foreshadowing her Act II dream role as Queen of the Fair, (aka The Sugar Plum Fairy) and a surprise romance with The Great Impresario.

A dramatically energized Joffrey ensemble is at its theatrical best, with plenty of virtuoso dancing to dazzle the most dye-hard of Nutcracker devotés as they gather in Mother’s shack for  a modest holiday party with fellow workers, bringing a bedraggled pine sapling to stand in for a Christmas tree. A terrific on-stage band (piano, cello, fiddle, and clarinet) brings out Tchaikovsky’s folk idioms. A hint of klezmer glissandos and altered phrasing lends a home-spun neighborhood feel to a collage of circles and intertwining arcs, making the traditional party dancing a theatrical event instead of the obligatory parlor dance, the movement taking on a rough-hewn folk dance flavor. Wheeldon’s combination of mime and choreographed stage action weaves character, relationships, and plot into the movement, creating a community of distinct individuals, believable as itinerant workers kicking back for a rare evening of spirited fun. 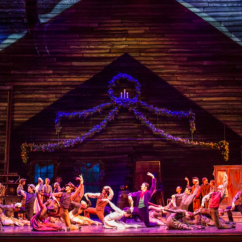 Wheeldon’s choice of musical cues for key storytelling moments is a source of constant   revelation, The Great Impresario’s entrance being only one of those moments, transforming a simple pas de bourée into a magical spell. A cowboy dance substitutes for the traditional mechanical dolls variations, astounding the listener with how well Tchaikovsky can evoke the feel of the Wild West. There are scant few presents for the children at this party, save for the Nutcracker doll. At party’s end, workers line up to get their pay from The Impresario, and the children are tucked into their beds on the floor, driving home the reality of their lives, constantly grounding the story in real life issues.

Wheeldon’s Nutcracker magic reaches a pinnacle of wonder in the transformation of the scrawny pine sapling into a friendly version of the Little Shop of Horrors Monster, completely overwhelming the stage, proscenium, and audience with its massive branches and six-foot-tall pinecones. The Rat Catcher becomes the Rat King, the battle between the rats and toy soldiers unspools with predictable humor, and the Nutcracker Prince’s victory transforms the puppet Nutcracker into the handsome Nutcracker Prince who literally sweeps Marie off her feet and into a snowy wonderland. There they dance a luscious Snow Pas de Deux with elegance and charm, exuding the joy of young love. 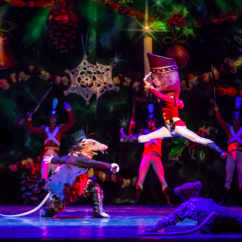 Both male and female ice crystals froth and flurry in Wheeldon’s version of the land of snow, adding texture and interest with syncopated groups cascading across each other in movement canons that mirrored the snowy chaos blowing up a storm outside on Michigan Avenue, sweeping Marie and the Nutcracker’s gondola across an icy lake for a night at the Fair. 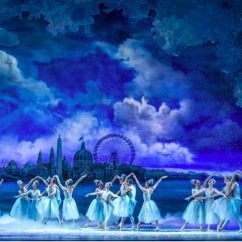 Intermission left me enthralled with Wheeldon’s inventiveness, the splendor of Julian Crouch’s sets and costumes, Natasha Katz’s inspired lighting, and Benjamin Pearcy’s astounding projections. Too often, remakes of classics never quite live up to the essential brilliance of the original. In this case, Wheeldon’s Act I achieved a unity of story, music, and choreographic design that became its own unique production, so special I couldn’t wait to see what he would do with Act II.

With its ethnic pavilions representing some forty-eight world cultures, The World Columbian Exposition offers a perfect platform for the program structure of Tchaikovsky’s Act II Land of the Sweets, where the parade of character dances from around the world entertains Marie and her Nutcracker Prince.  Functionally efficient, Act II traditionally enables a ballet company to showcase its dancers in a series of brilliant variations, entertaining enough in and of themselves. Here, Marie's story essentially stops as she and Peter become spectators for much of the act. The storytelling originality of Act I was hard-pressed to carry over into an Act II with such a specific, pre-determined thematic musical structure.

Wheeldon brought some clever shifts, such as the Russian dance transformed into Buffalo Bill’s Wild West show, complete with lasso tricks. Fabrice Calmels and Christine Rocas's steamy Arabian was a crowd pleaser, and Matt Roben’s Mother Nutcracker atop her moving house was hilarious, along with the life-sized dancing walnuts she was housing. 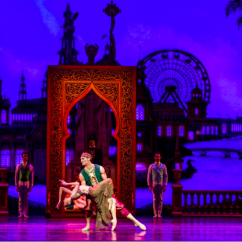 But much of the dramatic tension that propelled Act I with so much originality and energy was lost to the fairly standard Nutcracker fare of Act II.  A major exception was the Grand Pas de Deux, the traditional climax of Act II. This duet, the pinnacle of technical performance for the most accomplished dancers in a company, is usually content to focus on the virtuosity and brilliance of the dancers and rarely ventures into dramatic relationship.

Wheeldon’s version is exquisitely conceived, performed as a true love duet by Jaiani as the Queen of the Fair and Blanco as the Impresario. 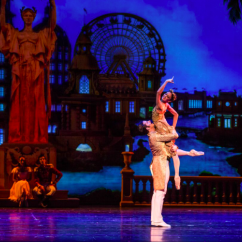 Victoria Jaiani and Miguel Angel Blanco  The passion and romantic swell of Tchaikovsky’s music is realized here in physical terms and dramatic relationship in a way I have never seen before, and it was the saving grace of an Act II that was quite beautiful but otherwise a bit of a storytelling let-down.

To its credit, the dream romance of the Grand Pas De Deux carries over into the denouement  of the story where The Great Impresario returns to Mother’s shack on Christmas day promising a brighter future for Mother, Marie and Fritz.

Could Act II have embodied more of the dramatic substance of Act I, and if so, how? Short of resurrecting Tchaikovsky and commissioning additional music, I’m not ready to say Act II isn’t complete as originally conceived, justifying Wheeldon’s impulse to leave well enough (almost) alone. But it doesn’t quite fill the dramatic promise of his Act I.