When Deeply Rooted Dance Theater (DRDT) artistic director Kevin Iega Jeff first saw a performance of “Indumba” at the National Arts Festival in South Africa in 2013, he was stunned by the work and how revealed the dancers were, “so human, so beautiful.” The fiery drive behind “Indumba” was a young South African choreographer/dancer, Fana Tshabalala. 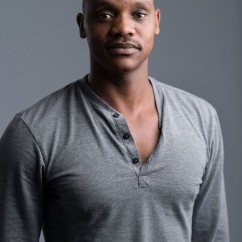 Tchabalala’s intention in his original work was to illuminate the impact of unresolved apartheid politics and the need for spiritual reflection in his native country. His  American-focused adaptation of “Indumba” for Deeply Rooted asks the dancers to reflect on parallels in the history of America and South Africa. “Who are you, and who may you be representing in these communities?” he asked his cast of seven DRDT dancers during a three-week Chicago residency last July. “Indumba,” and Tshabalala’s residency are funded by a MacArthur grant, the first commissioned piece of DRDT’s International Choreographer’s Initiative.

“Indumba” means “hut for traditional healing” in Zulu, and is the term used to designate the spiritual healing place where people come to reveal themselves, under the guidance of village elders and spiritual healers. Telling their stories through ritualized reimagining of their trauma, participants experience a reversal of the atrocities and terror, spiritual cleansing of the self, and communal realignment. 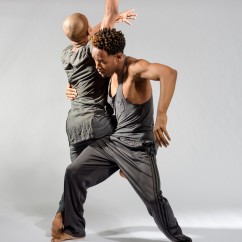 “The more we engage in each other’s stories, the more we find our common humanity, our connection to each other,” says Iega Jeff. “Indumba” crystalizes Deeply Rooted Dance Theater’s mission to do just that, addressing gripping political issues through dance to achieve understanding in a world fraught with political divisiveness. “When we understand where that divisiveness comes from, we can use that understanding to find alliances and solutions.”

“Indumba” arose out of Fana’s frustration with South Africa’s  Truth and Reconciliation Council, established by Mandela to prevent civil war in the aftermath of apartheid. “People came there to confess their crimes,” Iega Jeff explained. “As long as they confessed, they were exonerated, but this didn’t create equity, and it didn’t address the physical and emotional or economic consequences people were still experiencing.”  “Indumba” empowers its participants to transform personal pain into a positive global expression. 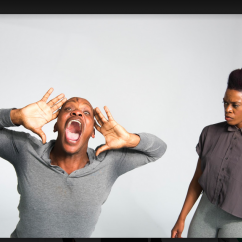 “As artists, we create our own Indumba,” Fana said in a recent conversation with seechicagodance. “We use Indumba to free ourselves….We use dance to heal.”

Fana has returned to Chicago to engage with the dancers in bringing their collaborative work to  performance level for its premiere at the end of this week.  As rehearsal gets underway, he implores the dancers to “try to stretch yourself internally. Open up the space!” His tone is passionate, his body electrically charged as he demonstrates a hyper-sensory chain reaction of impulses radiating out from his center and releasing like hot embers from the palms of his hands.

Rehearsal director Joshua Ishmon, who also dances in the piece, coaches his fellow dancers to “discover part of yourself; discover someone else,” launching an improvisational warm-up that gradually moves the dancers into the psychological and physical space of “Indumba.” Discovery activates much of their movement, beginning with deep, internal contractions and progressing to minute articulations of the spine and shoulders, moving out through the neck and extremities and expanding from personal exploration to group interaction. The dancers congeal, break apart, realign. They internalize Fana’s hyper-kinetic reactivity and keen sensory  awareness of each other. Fana scans the room like a bird of prey, his eyes lighting on each dancer as if searching for their essence. When he sees that they have reached the brink of readiness, he starts the music, a slow, barely audible bass drone that signals the dancers to begin ”Indumba.” 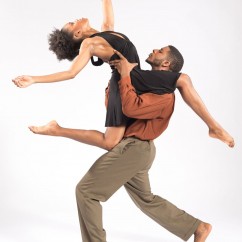 Elements of ceremony waft in and out of “Indumba’s” solo, duet, and group episodes, with the lanky, eloquent Ishmon serving as sometime Shaman. A reverential spirit encloses the space, transforming it into a highly-charged safe zone, where rage,  brutality, anger, and fear commingle with tenderness, comfort, and relief. Each dancer eventually tells his or her own story, each uniquely powerful in its own intensity, each a catalyst for another, until the ensemble owns all the stories, and they swirl together in a frenzy of spirit-possessed slashing, skittery footwork, and wild leaps, exorcising their pain.

After an hour, the room has spent itself on this cathartic process and the dancers recover in silence on the floor. Fana waits, lets stillness restore the space, and then very loudly, very simply, commands them,  “Go surrender!!”

“My fear,” he says, “is that you will know this dance too well. Don’t know it! It should be like hot ash in your hand. You cannot hold onto it!” 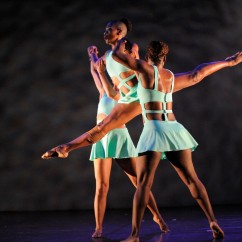 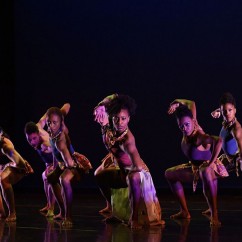 For further details, tickets, and directions, go to seechicagodance.com and click on "Upcoming Events."