Akram Khan's "Giselle" is not the only exciting thing this February, an unprecedented month for dance

As I write this, it’s 0 degrees, but it feels like -4. Motivation to leave the cozy comforts of fuzzy slippers and brave Chicago’s winter right now ranges from slim to none. But while February might not bring much of a change in temperature, there are a couple of dance events that make it easy to put on the boots, pants, hats and gloves and brave the weather for a night out. February has turned out to be a surprisingly fruitful month for dance in Chicago, and I’d venture to call a few of these productions “not to be missed.” So, zip up that puffy coat and head to the theater.

English National Ballet makes a trip across the pond Feb. 28-Mar. 2 for the first time in more than three decades, for an exclusive engagement at the Harris Theater. The company performs Akram Khan’s “Giselle,” a uniquely original take on the 1841 ballet which fuses kathak, a form of dance originating from India, with ballet. The score, by Vincenzo Lamagna, is a manipulation of Adolphe Adam’s original, and will be played live by the Chicago Philharmonic. I mentioned it’s an exclusive engagement, right? Meaning, this is the only spot in the country American audiences can see this stunning new telling of the classic macabre tale.

On Valentine’s eve, the Joffrey Ballet premieres a brand-new ballet by Yuri Possokhov, based on Leo Tolstoy’s “Anna Karenina”. The company recruited an all-star team for the project, including acclaimed composer Ilya Demutsky, who created an entirely new score. Learn more about this exciting premiere, running 10 performances at the Auditorium Theatre, in my feature for the Chicago Tribune. 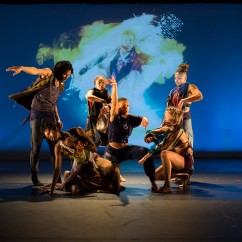 Urban Bush Women in 'Hair & Other Stories,' photo by Morgan & Owens The Dance Center has a busy month ahead, with the venue’s debut performance of Ananya Dance Theatre Feb. 14-16 and Urban Bush Women Feb. 28-Mar. 2. Anaya’s “Shyamali: Sprouted Words” is a timely Bharatanatyam work exploring themes related to sociopolitical activism and the resilience of marginalized groups, based on the metaphor of grass, which springs back after being trod upon. Urban Bush Women, long-time friends of the Dance Center, presents a new version of founding artistic director Jawole Willa Jo Zollar’s “Hair & Other Stories”, originally created in 2001. Maybe it's part of Zollar's succession plan; she recruited associate artistic directors Samantha Speis and Chanon Judson to recreate and reimagine this modern classic, which explores race, gender, body and class identities from an African diasporic perspective, through a range of experiences surrounding black hair.

For one night only Feb. 2 at the Auditorium Theatre, Chicago’s Trinity Irish Dance Company gives its first full evening at home in over a decade, including two world premieres. This pioneer of contemporary Irish dance has long been pushing the envelope of the form, and founding artistic director Mark Howard continues to promote a modern aesthetic for the genre which, above all, values the company’s women and men on equal footing. The more ambitious of the premieres, “An Sorcas” (Gaelic for “the circus”), uses the circus as a metaphor for reflecting on Irish dance, and the juxtapositions among artforms that toe the line between substance and pure entertainment.

And there’s much, much more to add to your dance card, including a new duet by Same Planet Performance Project’s Joanna Read for captivating performers Michelle Giordanelli and Michael O’Neill, works-in-progress from Dropshift Dance and Emma Draves and the Power Ouch! Festival: three evenings of dance, installation and performance art at Links Hall. The theme is “how violence shapes our lives and experiences,” ironically co-curated by Butoh artist Carole McCurdy and Aurora Tabar, who once did a long-term performance project giving hugs on the street. But I suspect this will be less about physical violence than about self-preservation in troubled times, and the fundamental right to rise up against the status quo. Movement-based performers I’ll be looking for: Cat Mahari, Eryka Dellenbach, Jeff Hancock and Rob Welcher.

Additional February offerings are listed below.

North Shore Center for the Performing Arts in Skokie

OUR BODIES AS TRANSLATORS - A Moving Dialogs Event

OUR BODIES AS TRANSLATORS - A Moving Dialogs Event

McAninch Arts Center at the College of DuPage