The excitement of live music, composed by company co-founder Joe Cerqua, Pharez Whitted, Earl Brown, and Clarice Assad, is a special treat, with the band an integral visual as well as audible presence in full view on a raised stage at the back of the dance floor. 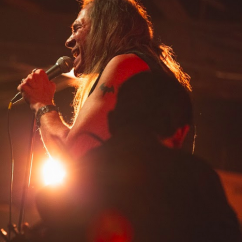 The company has never looked better. Clearly, CRDT’s initiative to develop new collaborative works over the past four years of its “Inside/Out” informal neighborhood engagements has paid off. The variety of choreographic and musical styles and dynamics makes for a well-balanced, fast-paced two acts featuring five different choreographic voices.

“Identity” is the hallmark of this season’s program, with an emphasis on the diversity of the company, its audiences, and its message of pluralism.

Haley’s impulse-driven “Roots” infuses the stage with emphatic gestures and high-intensity contrasts. Cerqua’s exciting, percussion-rich score perfectly complements Haley’s earthy pulsations and African dance-inspired movement. The choreographer gives each of the four men and four women dancers a chance to show off individual strengths, from primitive and predatory to passionate and flowing. New company dancers Briana Arthur and  Joe Musiel are particular stand-outs.  Haley’s spatial design effectively pitches unison ensemble work in counterpoint with solo or duet variations, creating a textured cross-hatching of music and movement. The piece builds to a  climax in a joyful jazzy dance and musical finish. 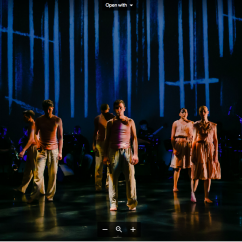 At the beginning of Keyser’s “apartamento,” a man’s body is on the floor. Is he dead? We don’t know. White noise from the band and static screen visuals suggest disorientation as, one by one, the dancers circle him and walk away.  Musicians Juli Wood on flute and Felipe Tobar on violin descend from the stage, enter the dance space, and begin playing. The voice of Charin Alvarez recites lines from Quique Avilés’s poem: “My tongue is divided into two.” There is counting, a border patrol, and suddenly the collapsed body animates and joins the ensemble in regimented movement. The two musicians mingle with the dancers, weaving a memory of salsa into the fabric of fear and relocation. The musicians return to the stage to animate movement with a snappy tango, and the piece dissolves into walls of bodies forming a cubicle of confinement.

A low drone of male voices ushers in Denise's "and again...," the full complement of ten dancers in costume designer Jordan Ross’s navy blue tunics and slacks for the five men,  flowing navy blue gowns for the women.  A voice reminiscent of a Flamenco lament tells the tale of adversity and perseverance while the dancers support each other in a series of partnerships and group movement. The final segment of “American Catracho” will premiere as part of the company’s 20th anniversary season next year. 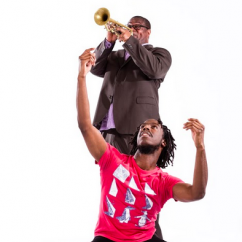 Joshua L.Ishmon and Pharez Whitted Joshua L. Ishmon, a striking dancer in his own right with Deeply Rooted Dance Theater, wears the choreographer’s hat as the 2018  CRDT Choreography Fellow to create program opener, “The Process Takes A Lifetime.” Composer and CRDT band member Pharez Whitted and Ishmon collaborated to create a cast of characters, including The Child, The “Bougie” (short for bourgeois wanna-be), The Elder, and The Young Progressive. Peppy jazz moves, cartwheels, handstands, and a few double tours pepper an expansive movement vocabulary, with plenty of leggy extensions, arabesque penchés. Clean, fresh attack and superb dancing delineate each of the characters, their interactions, and the evolution of their relationships. Ishmon explores same-gender and mixed-gender relationships with inventive partnering and convincing, if somewhat stereotyped, dramatic instincts. Briana Arthur and Richard Peña worked especially well together in a beautifully danced duet that layered the joys and ambiguities of young love. Arthur, a stunning young dancer, new to the company this year, transformed her character from child to adult in a poignant solo plumbing depths of anguish to end the piece. Ishmon’s quasi-narrative structure gives the hint of a story without entirely committing to story-telling, which can be confusing. The impressionistic episodes, while interesting, don’t come together in a cohesive conclusion, leaving the beautifully danced ending somewhat problematic.

Rivera and Brictson’s collaboration with composer Clarice Assad and arranger Stu Greenspan closed the evening with “Sin Fronteras” (2017), an energetic celebration of Latin America and American jazz that finished with a splash. Richard Peña brought humor and buoyant brisé volés to an impressive solo turn. 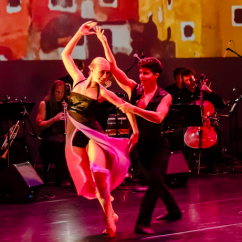 You can catch a  final performance of “My Past/Our Present” at 7:30 PM, October 27th, at the Reva and David Logan Center for the Arts.