It didn’t take more than a quick glimpse of Deeply Rooted Dance Theater in breathless grands jetés across the studio at the end of company class last week to feel the solidarity of a company that has reached its twentieth anniversary charged with unified purpose and spirited determination.

When asked what it feels like to have survived as a company for twenty years, tall, lanky artistic director Kevin Iega Jeff gives a winsome smile. “Humbling,” he responds in his typically modest way. “Thankful.” A piercing pre-Thanksgiving Chicago chill had swept the city into scurrying mode outside the State Street address the company shares with Ballet Chicago. Inside, a spirit of gratitude lingered in the steamy humidity of the rehearsal studio, fogging the windows and clinging to the dancers’ sleek bodies following run-throughs of several pieces to be performed this weekend as the company kicks off its anniversary year Saturday, December 3rd and Sunday, December 4th at the beautiful Reva and David Logan Center for the Arts on the University of Chicago campus..

“Inspired,” adds co-founder and associate artistic director Gary Abbott, the less talkative but no less philosophical of the two. Abbott had just finished rehearsing his “Bach’d,” a lyrical flirtation of movement and music that navigated the phrasing and orchestration of Bach’s Brandenburg Concertos #2 and #4 with a keen ear and silky touch that united music to breath and dancers to one another. 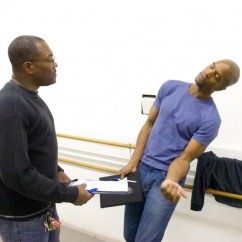 “When we began, people didn’t understand who we were,” says Iega Jeff. “The company’s founding signified a way for us to grow as people, not just as  dancers.”

Company member Joshua L. Ishmon is a prime example of how Deeply Rooted carries out that mission.“We knew Josh wanted to be here,” Iega jeff says. As a student, company dancer, and now choreographer of “When Men,” which will premiere this weekend, Ishmon has matured into an artist of depth and promise. 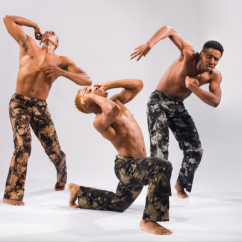 “When Men” begins with an impassioned, percussive trio set to the voice-over narrative of Charlie Chaplin. “We are not machines,” Chaplin’s voice intones against the angular impulses of male dancers railing against confinement. Organic rhythmic patterns and powerful core gestures compliment the cadence of human speech in Chaplin’s elevated diction in a way that underscores the pain and desperation of men trying to both escape their constraints and embrace their strengths. Iega Jeff expresses a hope that audiences, especially men, will see in this piece an opportunity to “open their hearts and examine their vulnerability.” Men, he says, have “a lot of brutality and heart.” He hopes that audiences will reflect on their compassion as well. 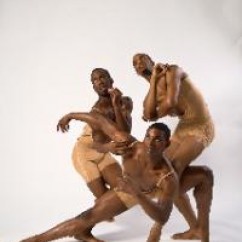 “Femme,” the other premiere on the program, is choreographed by DRDT Artistic Team Member and Education Director Nicole Clarke-Springer. Described by her colleagues as “very much a mother, a feminist, and a true ballet ‘bun-head,” Clarke-Springer’s work revolves around what women have to encounter to carry out roles of leadership. A seamless blend of classical and African dance forms, and set to the music of Nina Simone, “Femme” parallels a journey of self-actualization, similar to that in “When Men,” but with a movement vocabulary and compositional structure uniquely feminine. Moving from regimentation toward increasingly free and joyous expression, the piece begins with a column of women in an alluring hip-swiveling unison march. “Femme” depicts a community of women led by their mentor, outspoken and militant in her riveting movement monologue, and yet a  nurturing force to her acolytes as she bestows her powers onto them and they evolve into individuals.

Deeply Rooted began as a way to “reimagine the aesthetics of contemporary dance” by connecting modern, classical, American, and African American traditions in dance and storytelling. Their goal was to demonstrate how art and beauty can play a transformative role in Chicago and in the greater world. A strong sense of community-building drives their mission of nurturing artists and fostering communication across cultural, political, racial, and economic boundaries.

“You build a community with people who are coming to see you,” says Abbott. Inspired by cultural traditions of the African diaspora,  Deeply Rooted seeks to expand audiences among the greater dance-going public with works that speak to universal truths that affect everyone. “That we’re still here, evolving, still celebrating kindness, love, intelligence, what makes us human—that makes us see who we are.”

“It’s a very important time for the company,” says Jeff. “We have always been on a trajectory to face difficult things. It’s a time for the company to step deeply into its mission. Deeply Rooted will be here as long as it makes sense,” he explains. As a member of the Chicago Dance Coalition, the company is able to engage on an equal footing with the Chicago dance community. “Chicago is prime to become a model to foster authentic dialogue. To create a model that will foster our growth and development, as well as new talent, we have to go through growing pains. You have to understand the needs of the community. Our companies have to speak up and say what their needs are.”

In a time of limited funds, much of traditional arts sponsorship dollars go to the biggest, most visible cultural institutions. “There’s not as much disposable income in the African American community,” says Abbott. “We have to educate our community as well.”

In addition to the two company premieres, this weekend's program will also feature works including "Jagged Ledges", "The March", "Bach'd", "Heaven", and more.

Reva and David Logan Center for the Arts

For further details and tickets, go to seechicagodance.com and click on "Upcoming Events."