Deeply Rooted Dance Theater’s “Aspects of Love,” is a valentine that packs a punch, shining a fresh light on a topic you might not necessarily associate with Civil Rights,  HIV/AIDS, Greed, or Feminism. And yet, all of these issues found their place on a program that also addressed love’s more traditional landscape of sensuality, intimacy, and mutual attraction.

Celebrating its 20th anniversary season, the company was in top form in the powerful, provocative program at Skokie’s North Shore Center for the Performing Arts this past Saturday, its first at the North Shore venue. While the house was not sold out, the program drew a diverse and enthusiastic audience, one that will hopefully continue to grow as this troupe’s inspired work gains wider exposure.

Fulfilling the company’s mission, “Aspects of Love” delivered a universal message the world could well use right now: that art and beauty can play a transformative role in our lives. This noble idea drives the company’s founding directors, Kevin Iega Jeff and Gary Abbott, in their pursuit of a dance aesthetic that “brings together modern, classical, American, and African-American traditions in dance and storytelling.”

Storytelling is front and center in “The March: Reflections of America’s Civil Rights Era” (2014), a joint work by Jeff and Abbott depicting a community whose love moves them from mourning a child lost to senseless violence to the strength and resolve of peaceful protest. In Jeff’s “Movement I: Bridge Over Troubled Water,” the Father (Joshua L. Ishmon)  literally bridges the bereaved Mother (Dominique Atwood), giving her the strength to go on living. The larger ensemble later mirrors the bridging of bodies in a marvelous variety of lifts and counter-balancing, providing a poignant choreographic link between the the song’s lyrics and the story, abstract enough to maintain the structural integrity of movement design, while using movement metaphor to fuel the story’s meaning. The achievement of such a delicate balance between medium and message is not always so successful in art that aspires to illustrate politically-charged themes. Jeff steps right over that trap, relying on a richly original lexicon of core-centered gesture to evoke the depth of grief and utter helplessness in the face of tragedy. The movement played out with directness and clarity in stabbing, angular impulses, set against Roberta Flack’s soaring flow of familiar lyrics.  When her voice sang “pain is all around,”  we witnessed the universality of loss in the very specific terms of Jeff’s beautifully-crafted group interactions, where choreographic invention told the story of their relationships. Movement II,  jointly choreographed by Jeff and Abbott, brought the larger ensemble together in a pleasing palette of cradling movement, set to Samuel Barber’s sonorous “Adagio for Strings.”  Large and small-group ensembles mirrored musical canons in waves of ascending strength, increasing in emotional intensity to its rousing climax. 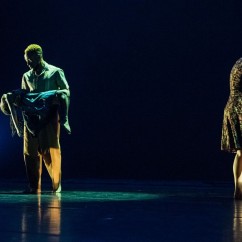 Words and movement congeal equally well in Joshua L. Ishmon’s powerful “When Men” (premiere). Book-ended by Charlie Chaplin’s fiery voice-over diatribe, three outstanding male dancers (Joshua Henry, Pierre Clark, and William Roberson) put muscle behind Chaplin’s call to overcome the greed, intolerance, and mechanization of the mind imposed by corrupt power. Ishmon’s movement visualization captures the anger, frustration, and pent-up rage of generations of young men struggling to escape the shackles of injustice with earth-bound percussiveness.  Ishmon’s optimistic vision liberates them to the modern jazz beat of Paolo Nutini’s music in air-born freedom, with wide-open sautés and athletic partnering. The final segment plays out against a reprise of Chaplin’s voice, reminding us what they have transcended. 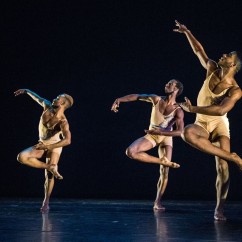 Joshua Henry, Pierre Clark, and William Roberson in "When Men"

In a perfect companion piece to “When Men,” Shaness Kemp is an earth goddess/exemplar of feminism to her cadre of acolytes in Nicole Clarke-Springer’s African dance-influenced “Femme” (premiere). Her hip-swiveling downstage march is a marvel of sensuality and strength, the six women in line behind her emulating her model. There is magic at work here, both in the choreography and the story it tells of a mother/mentor initiating her daughters into the sisterhood of women. Set to the music of Nina Simone, the sound of bells and chanting evokes a ritualistic environment for Kemp to cast her trance-like spell over the initiates. It’s no accident that Clarke-Springer chose Simone’s interpretation of “My Way” for their buoyant emergence into maturity, giving each of the dancers a solo turn that showed off each one’s unique dance spirit, both entertaining and invigorating. High-energy solos and duets culminated in a glorious circle of sautés, a radiant affirmation of life. 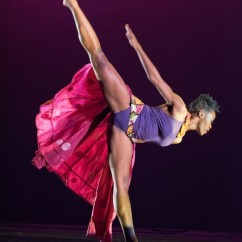 Gary Abbott’s “Bach’d” (2011) is a love romp for three couples that celebrates the passion and brilliance of Bach’s Brandenburg Concerto #2 with unbridled joy and a keen ear to the musical gifts Bach bestowed on the world. Abbott’s musical acuity abounds in his choreographic partnership with the music, with a refreshingly creative compliment of movement in lush fulfillment of the music’s passion. At once playful, romantic, flirtatious, and even goofy, Abbott captures the Baroque flourish of instrumentation in cartwheels and hand squiggles, head turns and tumbling, as if merely dancing the dickens out of the music weren’t enough. Crazy for Bach, crazy for each other, the dancers outdid themselves in solos, duets, trios, and full ensemble sequences.  Joshua L. Ishmon’s solo, goofy and wonderful in its exuberance and expansiveness, completely captivated.

The tall lanky Ishmon and petite Jennifer Florentino brought compelling dramatic tension to Kevin Iega Jeff’s “Wild Is The Wind,” (2013), a love duet of exquisite sensuality and intimacy between a man and a woman. 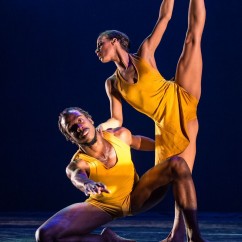 Joshua L. Ishmon and Jennifer Florentino in "Wild is the Wind"

“Jagged Ledges” (2004), while beautifully danced and created, commendably, to foster awareness of HIV/AIDS, suffered from a disconnect between the dancing and the poetry, performed on stage by Rebirth Poets. It is unfortunate that most of the poetry was unintelligible due to a combination of poor diction and inaudibility. In addition, even though choreographers Jeff and Abbott integrated the poetry performers into the choreographic whole, the overall quality of their performance was not at the same level of professionalism as that of the dancers. 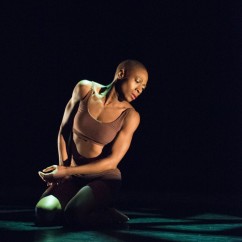 Closing the program, Jeff and Abbott’s collaborative “Heaven” (2004), was simply that—heavenly, a gospel-inspired diversion of angels to showcase these marvelous dancers and send the audience home on a high note, one my partner sang all the way home! 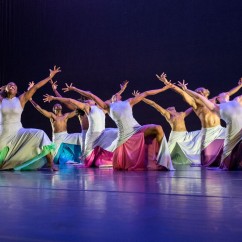