Ensemble Español soared into its 42nd year this past weekend at North Shore Center for the Performing Arts, paying tribute to the memory of famed Flamenco dancer and choreographer José Greco, and honoring company founder Dame Libby Komaiko.

The two-act program began with Juan Mata’s beautifully orchestrated blend of vintage film footage of Greco’s illustrious career and live stage performances of his choreography. Three of Greco’s children, Carmela, Lola, and José II, carrying on their father’s legacy, danced individually, together,  and with the Ensemble, along with a host of stellar guest artists, to commemorate the 100th anniversary of Greco’s birth. 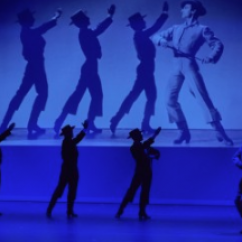 Born in Italy and raised in Brooklyn, José Greco was known for popularizing Flamenco, as well as the classical and folkloric dances of Spain, throughout Europe and America. His long career included television, film, and live stage performances.

Juan Mata’s staging merged film excerpts from Greco’s most popular pieces, projected onto a huge screen, with  live dancers identically costumed, entering mid-dance in front of the projection on stage. For each of several different pieces, gradual cross-fading from projection to the stage gave way to a fully-lit stage and all-live performance. The convention of cross-fading from Greco on film to his children and Ensemble Español dancers live on stage had the dual effect of a poetic metaphor and a visually exciting stroke of imaginative dance theater.

Following the opening video montage, presented documentary style, José II performed his father’s solo, “Zambra Farruca” (1950) to the live music of two guitars and vocals. José II, somewhat constrained by age in the upper body, still spun crisp double and triple turns ending in a slicing dive to the knees and demonstrated exacting clarity and rhythms in his footwork. 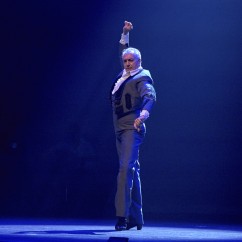 The historic film rendering of papa Greco’s virtuoso footwork, striking good looks, and charismatic stage presence transformed into the here and now on stage in rousing pieces like his best known “El Cortijo,” (1950), performed by José II and Ensemble dancers, and the charming trio, “La Castellana” (1940), performed by Carmela and Lola Greco and Jorge Perez.

Both Carmela and Lola Greco each dazzled in her own unique way with passionate solos that embodied the epitome of Flamenco artistry, sensuality, and style, in the deeply moving work of mature artists. 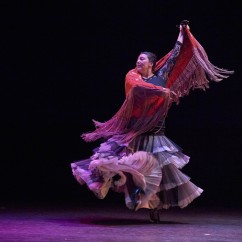 The lyricism of Lola’s captivating solo, “Cordoba de Albeniz,” which she choreographed in 2017 to the music of Albeniz and dedicated to her parents, evoked memory and longing in poignant, full-body movement, with very little reliance on her father’s heel-stomping signature.

Carmela’s performance of her father’s  choreography, “La Petenera” (1970), set to the music of Antonio Gabarri Jimenez, composed for this tribute, used a shawl with red fringe as both costume and prop. Here too, memory seemed to consume the piece in lyrical passages with the heart-trill of vibrating castanets, embodying the emotional pulse of the dancer. Carmela Greco’s amazing expressive range was at one with her music, arms and hands weaving an entire story of love and loss accompanied by complex foot rhythms. 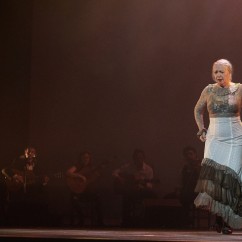 Topping off Act I was Komaiko’s stunning “Bolero,” celebrating its 25th anniversary. Film footage of Greco’s gypsy-inspired version of Bolero morphed into the live stage performance of Komaiko’s choreography, underscoring her first Flamenco teacher’s influence. And yet, Komaiko’s distinctive voice and theatrical vision veered in quite another direction, her sweeping lines of contrapuntal group movement augmenting the structural build of Ravel’s music with contemporary dance sensibilities. Komaiko brings rare creative vision to Ravel’s oft-used masterpiece, infusing the stage picture with huge projections of Picasso’s bold modern abstractions. The compliment of movement across the lines of painting, dance, and music heightened the drama of the whole.

Act two featured the world premiere of Carlos Rodriguez's “Mar de Fuego” (Sea of Fire), which he dedicated to Komaiko. In this full-length ballet,  Rodriguez expands on the fusion of Flamenco with modern dance and jazz forms that we saw in his riveting solo, “Sentimiento” (2017), and his duet, “Luna Metalica” (2014) last fall in the Ensemble’s  Auditorium Theatre “Made In Chicago” performance. 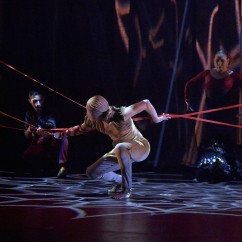 Based on an East Asian legend,“Mar de Fuego” follows a loose story line depicting how we are destined to connect with each other via a magical red cord from the lunar gods. “We are connected, regardless of place, time, or circumstances,. This magical cord may stretch or tangle, but never break.”  Michael Young is riveting as a faceless figure with an arm and leg entwined in the red cord, weaving this concept throughout the various segments with the slithering creepiness of a modern dance spectre, reappearing to entwine the dancers and each discrete segment to the whole. 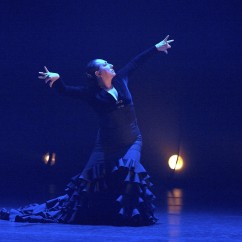