Here at See Chicago Dance, we've been through a lot of transition this year. This is the end of my first year as editor, and Heather Hartley's last as executive director. As our search for a new ED continues, steadfast leadership from interim ED Surinder Martignetti has kept us forging ahead, not just according to the status quo, but pushing forward with new projects and initiatives for 2020. I honestly can't wait to get started on our upcoming video preview project and kick off the first cohort of SCD writing fellows next summer, in which we'll mentor young and emerging writers looking to dabble in dance criticism.
But before we get there, let's look back on the extraordinary year Chicago dance had. Our team managed to see and review more than 100 shows, and did our level best to visit every corner of this city—from Skokie to Calumet Park—and every genre of dance we could as our robust dance community continues to expand. Sadly, Brianna Heath and Joanna Furnans have moved on to pursue other projects. I am so grateful for their voices on SCD's digital pages this year. We also welcomed Emma Elsmo last month, who you'll see more from in the year ahead.
And of course, there was glorious dancing to behold. We couldn't narrow to 10, so our top 10 is actually 11... Anyway, here were our favorites from 2019:
Joffrey Ballet’s “Anna Karenina” in February: If you saw Yuri Possokhov’s world premiere of “Anna Karenina,” adapted from the 1878 novel by Leo Tolstoy, you don’t have to read the book, although the emotional wallop of this production may be an incentive. The stunning achievement of artistic collaboration, from Joffrey artistic director Ashley Wheater’s vision and leadership to the dramaturgy by Valerie Pecheykin, Possokhov’s magnificent choreography, composer Ilya Demutsky’s innovative original music, Tom Pye’s visual design, and brilliant dramatic performances by the Joffrey dancers, goes to the heart of the human need for love. Possokhov and his artistic team distilled the novel’s complex themes through a melding of movement and music that conveys the power and magnitude of Tolstoy’s story. —Lynn Shapiro
Ananya Dance Theatre in February: I loved how Ananya presented a range of movement from athletic to gestural to portray pieces of different women's fights against injustices in a very intimate way. I enjoyed the unique blend of classical Indian dance forms that created a fresh contemporary style, and I appreciated the opportunity to connect with other Midwest dance communities. —Jordan Kunkel
Hubbard Street Dance Chicago and Malpaso Dance Company in March: Beyond the stunning dancing that you can expect to see from both Hubbard Street Dance Chicago and Malpaso Dance Company, this performance highlighted Chicago as a hub for international dance and highlighted the beauty that comes from blending differing stories, cultures and movement practices. —JK
Giordano Dance Chicago Spring Series in March: The sheer variety of mood, movement, music and spatial design in Giordano’s Spring Series gave continuing testimony to GDC’s commitment to cultivating and expanding the definition of jazz dance. From Brock Clawson’s film-noire-esque “Sneaky Pete” (2016) to the get-down, go-for-broke dance party groove of Ray Leeper’s “Soul” (2018), Autumn Eckman’s feel good “Commonthread,” (2009), as well as her lyrical love poem, “Alloy” (2011), and the wild partnering and predatory intensity of Ron De Jesus’s “Prey” (2003), the concise program of six pieces was more than up to GDC’s high standards. The centerpiece of the evening was the world premiere of Marinda Davis’s dramatic “Flickers,” which reaches deeply into her all-consuming challenge of living with eight auto-immune diseases, some of which are life-threatening. In this heart-wrenching ballet about surviving pain, moving from despair to hope, from darkness to light, Davis complements a jazz-based aesthetic with the momentary frenzy of ballet beats and frantic percussive shifts of focus. The dancers periodically coalesce in stunning architectural constructs from which they lift and support each other, fall into each other’s arms, climb and reach for the beyond. —LS 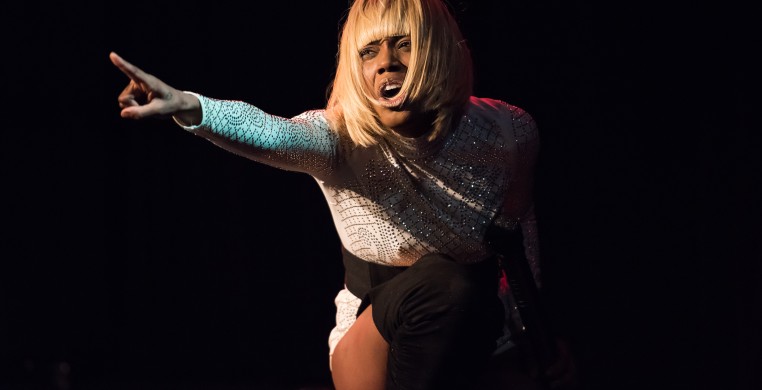 Jenn "Po'Chop" Freeman, photo by Greg Bell Po'Chop/Jenn Freeman's "The People's Church of the Ghetto" in April: At once a performance, a church service, and an installation, Jenn Freeman's transformative and exciting work "The People's Church of the G.H.E.T.T.O." gathered folks at the Blanc Gallery for a powerful experience combining dance, spoken word and burlesque to honor black women from Bronzeville. —Brianna Alexis Heath
Rennie Harris and Puremovement's "Lifted" in August: This year saw a celebration of black creativity by some of the top art and cultural institutions in Chicago. And with curator Tara Willis at the helm, spaces like the MCA welcomed renowned hip hop dancer and scholar Rennie Harris and his company, Puremovement, of Philadelphia. "Lifted" was an electrifying hip-hop ballet that infused gospel and house sounds to honor Black American experience. —BH 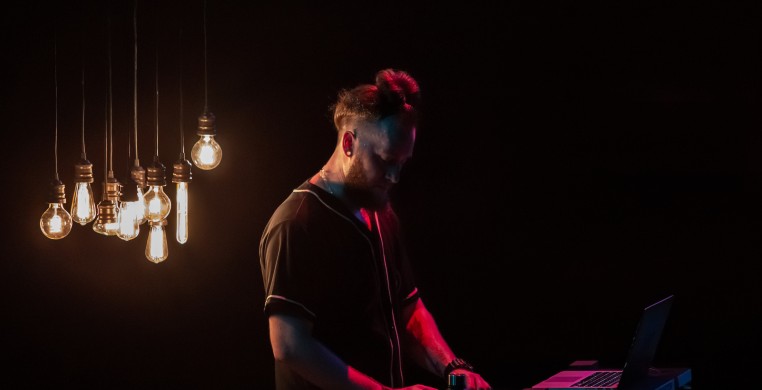 Nico Rubio in "By Way of Taps" Nico Rubio's "By Way of Taps" in August: The vibe at Thalia Hall is what I remember most about "By Way of Taps," a one-nighter culminating Nico Rubio's Chicago Dancemakers Forum year at the storied music venue. That, plus, the all-star line-up of some of this city's best tappers—Rubio, Martin "Tre" Dumas, George Patterson and Starinah Dixon, among them—grooving to J. Dilla's beats, mixed live by Rubio. —Lauren Warnecke
Emily Johnson's "Then a Cunning Voice and a Night We Spent Gazing at Stars" in Calumet Park: This overnight, collaborative and communal performance was so different from anything else I had experienced before that I often found myself as equally uncomfortable as I was mesmerized. Dance like this and Chicago histories, like the one shared that night, are something truly special and memorable to be a part of. —JK
Harris Theater Tribute to Lar Lubovich in October: Staging a whole program of a single choreographer’s work with four different dance companies can be a challenging enterprise to coordinate, and an ambitious one to curate. The success of the Harris’s tribute to Chicago native and internationally-acclaimed choreographer Lar Lubovitch owes much to the inspiration Lubovitch, Jay Franke, and David Herro brought to their innovative, 10-year experiment called The Chicago Dancing Festival. Lubovitch’s unique choreographic voice and artistic predilections are in clear evidence in the pervasive lyricism, technical complexity, visual design and musical visualization in each of the four works, and yet each offered a distinctive aspect of this master choreographer’s rich palette, giving us a delectable opportunity to appreciate the breadth of his contribution to the art form. Especially noteworthy were two gems, “Rhapsodies” (2007), set to Robert Schumann’s “Symphonic Etudes” Opus 13, and excerpts from Act 3 of “Othello.” “Rhapsodies,” danced by Hubbard Street Dance Chicago’s Andrew Murdock and Craig Black and Jonathan Alsberry from the Lar Lubovitch Dance Company, is playful, heart-wrenching, elfin, percussive, slinky, slippery, devilishly difficult, and a magnificent showcase for three astonishing men; dancing as a trio, in couples, and solo, their crisp execution underscores Lubovitch’s capacity for both wit and emotion. His discovery of both extremes in the Schumann score reinvents the music with movement that resists a conventional response to its familiar rhythms and melodies. Revisiting Lubovitch’s “Othello,” with the Joffrey Ballet’s Fabrice Calmels as Othello, Victoria Jaiani as Desdemona, Temur Suluashvili as Iago, and Rory Hohenstein as Cassio, gave me the chance to marvel once again that not only is this choreographer a master of musical visualization, but also visualization of Shakespearian text. Masterful character delineation and nuanced movement dialogue, especially in the brilliant duet between Iago and Othello, were matched by the sublime artistry of these dancers. —LS

Project Bound Dance's "Notified" in October: This young company offers a refreshing mix of polished contemporary technique and intellectual dance theater, particularly with October's "Notified" at Links Hall. In it, the company explores media fatigue and the cultural impact of technology and social media, juxtaposed with a generation's hunger for IRL facetime and connection. That's all been done, of course, but not quite like this; Project Bound is quite certainly one to watch in the coming years. —LW
Robyn Mineko Williams' "Echo Mine" in December: "Echo Mine," an inspiring multi-dimensional collaboration and a heartwarming tribute, tapped into my sentimental side through captivating choreography and stunning imagery. An all around gem. —Emma Elsmo